So You Want to Be a Bigfoot? 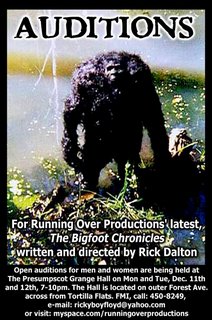 Slated to go up in early March, it's Running Over Productions' latest and greatest idea for keeping Portlanders entertained. Join up with the unbeatable tagteam that produced such exciting and dramatic plays as the fantastic feat of stagecraft that was Wharf Rats, and other prior productions which we all loved including The Zombie, the Creature Double Feature of Maniac and The Brain That Wouldn't Die, and their riveting adaptation of Roger Corman's Bucket of Blood.

The Bigfoot Chronicles -- AUDITIONS!
WHEN: Monday and Tuesday, December 11th and 12th, 7:00-10:00pm
WHERE: The Presumpscot Grange Hall, 1844 Forest Ave, Portland, Maine
AND THEN WHAT: Rehearsals will be held on Tuesdays, Wednesdays, and Thursdays from 6:45-10:00pm, starting January 9th.

Please forward this information to anyone and everyone who might be interested!!!
Posted by Michelle Souliere at 11:17 AM