The Barnum of Maine

Ezra Stephens, a storekeeper in Bryant Pond in the mid-1800s, managed to procure a trained bear and start his own circus in Western Maine. An unfortunately truncated 1953 article from Bandwagon describes his efforts to make himself "The Barnum of Maine," and credits him with originating the "bannerline" and the sideshow.

Stephens proved himself a first-class showman in presenting this bear to the public, so he decided that the amusement world was his forte and commenced adding to his attractions. What to offer the public was never a problem with him, as he emulated the efforts of P. T. Barnum, and in the early years the attractions Barnum was exhibiting in his American Museum would find a counterpart in the Stephens' show.

I knew from his gravestone in Bryant Pond that Stephens died July 6, 1899, but until today I wasn't aware of how he died. I ran across this item in a scrapbook kept by my great-great-grandfather: 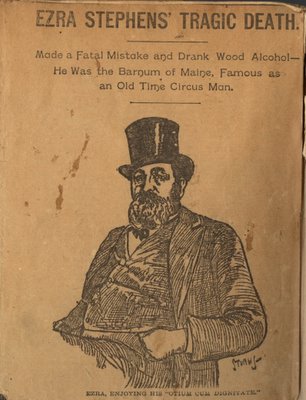 The article describing his death was not attached, so I can't say how Stephens managed to mistakenly drink wood alcohol. If he really was "The Barnum of Maine," I wonder if he charged admission.
Posted by Chris at 1:58 AM