As a follow-up to Michelle's Sea Serpents in Maine, I offer "A Plea For a Monster," from the Harper's New Monthly Magazine of July 1860. Author Charles Nordhoff argues for the existence of sea serpents, and marshals as evidence several sightings made along the Maine coast.

A letter of March, 1781, from Captain Little, of the United States Navy, to Mr. Bradford, of Boston, states that in May, 1780, as he was lying in Broad Bay (Penobscot), in a public armed ship, he discovered at sunrise a large serpent coming down the bay on the surface of the water. The cutter was manned and armed; he went himself into the boat; and when within 100 feet of the serpent the marines were ordered to fire on him; but before they could make ready he plunged into the water. He was not less than 45 to 50 feet long; the largest diameter of his body was supposed to be 15 inches; and his head nearly the size of that of a man. He carried four or five feet of his length out of the water, which had the appearance of a black snake. He was afterward pursued; but they never came nearer than a quarter of a mile. [p. 181]

See also Rev. Abraham Cummings' description of a serpent witnessed in Penobscot Bay in 1809 [p. 183], an 1830 account from Kennebunk [p. 184], and all the great illustrations — mostly of ships confronted by serpents and giant squid. 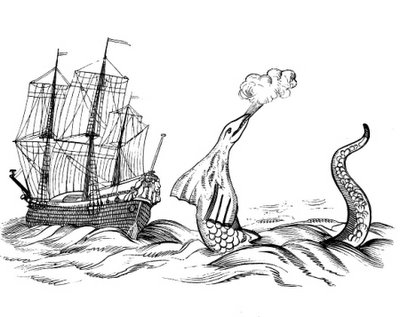