The Hermits Will Always Be With Us

It seems that every town in Maine has had in its history a hermit or two—men who've dropped out of society and holed up in a cave or remote hovel for a time. Some undoubtedly suffered from undiagnosed mental ailments, though the rumormongers would often imagine them the victims of unhappy romantic episodes.

One of the hermits, Timothy Barrett, came to Davistown in 1793, and lived in "a cave dug into a clay bank ledge up above Ruffingham Meadow, on a stream that now bears his name." Couldn't happen today, right? Compare this article from the Kennebec Journal of Sept. 28, 2005:

A 43-year-old man who has sculpted a home out of nearly 100 feet of rocky Kennebec River bank in the past year may be forceably evicted by police today.

The American Memory project has four photos of the "Hermit of Maine," who in 1936 was entertaining visitors to his Freeport shack by playing on his "2 organs and one piano built together." 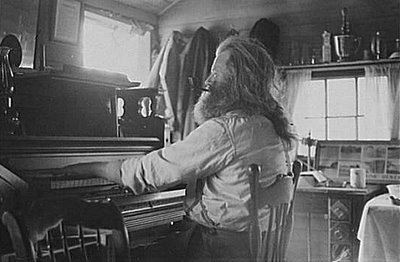