Imagine my pleasure when reading through Mysteries of Time and Spirit: The Letters of H. P. Lovecraft and Donald Wandrei to find transcriptions of a note sent by HPL to Wandrei from my very own town during one of his antiquarian New England tours. I wish he had written more... I'd like to know what he peered around at and found of interest besides the brief notes given. Here is the text:

From one Y to another! In the Portland one tonight -- & this is a bird! Just finished, spick and span, Georgian architecture, cheerful rooms, & solicitously courteous chap at the desk. Believe me, son, it doesn't do to knock all Y's without a hearing!

Glorious day for the coach trip. Portland is not nearly as colonial as Providence, & looks just as citified, although it's only 1/3 as large. Very fascinating from its marine colour -- I went up that ancient tower (1807) shown on one of these cards, and had the maritime vista of my life! Have done the whole town and visited the colonial suburb of Stroudwater. Shall do the two Longfellow houses tomorrow -- also a visit to Yarmouth, a quaint & ancient fishing village which will form my farthest north. The White Mts. are visible from here -- had Mr. Washington pointed out to me. On Saturday I swing down to Portsmouth, Newburyport, & Haverhill. Maybe home Sunday, maybe not. It's a great life!

Well, let's see... I bet the "ancient tower" is none other than the Portland Observatory (see my nighttime photo). 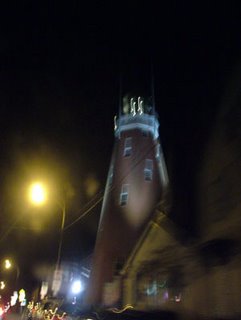 ...and I bet he took a good gander at the Tate House and the Means House when he visited the Stroudwater area. More info on the Tate House is available at their website, but be sure to allow popups as the entire page is based on popup windows.

I hope he wandered down around the East End neighborhoods on Munjoy Hill, because there are a number of very old houses that I'm sure he would have appreciated on those tree-lined hilly lanes. 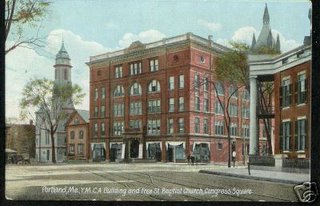 The YMCA was indeed brand new when he stopped in. What timing! Prior to that it was in a different building than its current location sandwiched between High Street and Forest Avenue, as I found on an old 1909 postcard seen on ebay, when it was next to the Free St. Baptist Church on Congress Square:

The current building (shown in its early glory) is being enlarged and updated in a massive spate of construction as I write. 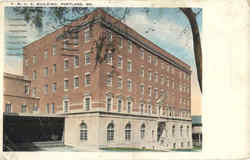 Posted by Michelle Souliere at 10:03 AM

A surprisingly cheerful-sounding message, considering the author. Not to mention that it's remarkable to see HPL write such non-turgid prose.

Anonymous-- It's funny, many of his letters are quite chipper pieces of writing, and much less heavily endowed (shall we say) than his fiction. :)