Tree love in the deep woods 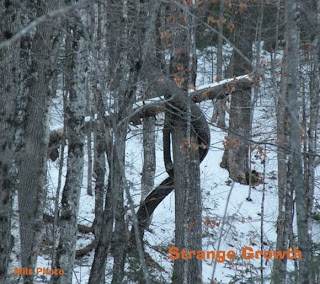 Milt's Corner on the Black Bear Blog has a great photo post showing some overly amorous trees that have become completely intertwined. Hooray for weird trees! Check out Milt's other entertaining and interesting photo posts while you're there.

and.... HAPPY NEW YEAR EVERYONE!
Posted by Michelle Souliere at 12:43 PM No comments:

A love of grave matters 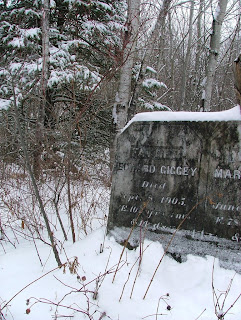 The Journal Tribune ran a great article recently, in which they interviewed Patricia Mayo about her love of cemeteries. Her graveyard pursuits are not unlike those of many of us who find a fascination in the toppled rows of stone markers that fill acres of the Maine landscape. The article talks about some interesting epitaphs, how Mayo got started on this hobby, and much more.

Patricia Mayo likes to wander around in cemeteries. She can spend hours in them, especially the old ones, taking in the artwork of the stones and marveling at the poetic inscriptions.

“Some people look at me like I’m really weird,” she said, but cemetery viewing is actually a rather common hobby, with enthusiasts seeing the acres of plots as a sort of museum.

For Mayo, her visits are about remembering – the people, the history and the art of the monuments.

The photo above is one I took myself, during one of my own boneyard forays. This one was taken exactly two years ago, on Christmas Eve 2006, in Fort Fairfield, in a small family cemetery well off the main road. I've visited many cemeteries throughout New England and New Brunswick, such as (click links below for a selection of photos)...

Posted by Michelle Souliere at 4:35 PM No comments: 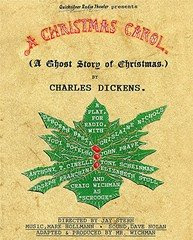 While most of us have been heavily exposed to Dickens' famous Christmas story, "A Christmas Carol," few in America know that it is part of a larger British tradition of holiday ghost stories. While here we tell spooky tales during the Halloween season, over in Great Britain they feast on the supernatural around cozy Yuletide fires as part of the annual holiday doings. Sounds good to me!

As a treat to listeners, Fred Greenhalgh of Maine's own Radio Drama Revival has announced that, although "Christmas is reasonably un-strange... on Christmas Day I'll be airing a contemporary dramatization of "A Christmas Carol" (never heard that one, right!)." Check out their website on December 25th for a special production of this timeless, hair-raising and heart-warming classic, as performed by Quicksilver Radio Theater wherein they return to the heart of the 1843 story - mining the dark veins of what its author called "a GHOST story - for Christmas."

If you're feeling the humbug vibe, drop into their website at http://www.radiodramarevival.com/ anyhow, because they have a great archive of fantastic fiction audio productions that should keep you entertained for hours on end through all manner of winter gales and slush storms!!!
Posted by Michelle Souliere at 9:23 AM 1 comment: 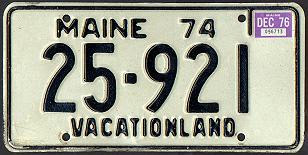 How can you NOT read something that starts with a paragraph like this?

The deal went down in a Wendy's parking lot in Biddeford, Maine, nearly eight years ago. Huddled between a Subaru station wagon and a 1961 Cadillac Coupe de Ville, two men made a seemingly lopsided exchange: One left with $40,000, the other with an old license plate.

The New Hampshire License Plate Museum has a nice selection of antique Maine license plates in their online display, for those of you curious about what they used to look like in the early 1900s. Click here to see some of their Maine plates. Likewise, the Plate Shack has a detailed rundown of more recent plates (boy I miss the old black and white ones).
Posted by Michelle Souliere at 10:44 AM No comments: 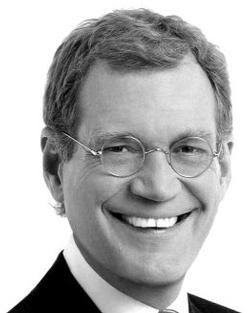 ...or perhaps I should say "melts" instead of "meets"?

A British Columbia local news article in which Dave Letterman reminisces about Paul Newman brings up an interesting example of Maine hybrid motoring -- and I don't mean an environmentally sound hybrid! Nope, this is the fire-breathing Volvo type. Read on...

“Dave? I’ve got a deal from a guy in Maine,” the voice on the other end said.

“It’s a custom Volvo 960 station wagon, OK? But it’s different. He’s going to take a small-block Ford V8 racing engine, strip out the transmission and suspension, then supercharge it. My guy’s gonna make it for me. Would you like one?”

“Well, yeah, Paul,” Letterman told the caller. “Wouldn’t we all?”

“So, Paul eventually brings the car over, drops the car off and this is the kind of car that people would stare at street lights,” Letterman told his TV audience earlier this year upon Newman’s death.

“It was like an atomic furnace under the hood. I used to love driving it. It would go 170 miles per hour and, underneath, the exhaust system would glow bright orange.”

Then, one day, Letterman was in the Volvo on a New York interstate with his girlfriend when she asked a simple question: “What’s that smell?”

Letterman turned to her and said, “Raw power and speed, baby.”

Wrong. The Volvo was on fire.

“We had to pull over. The car was shooting flames everywhere. It couldn’t handle the power,” Letterman said.

“I call Paul and say ‘The wheel wells, everything is on fire.’ But, wow, what a car. Paul Newman and I were the only ones with this car.” 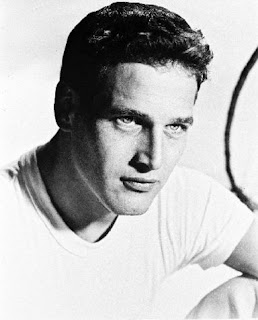 Paul Newman fans will be happy to note that the article contains some great anecdotes about the man.

A Bangor Daily News article relates a number of his ties to Maine, where he stayed during the filming of Maine author Richard Russo's story, "Empire Falls." According to the article, Newman was also a regular benefactor of the College of the Atlantic.

Another blog, daddytypes.com, did a little sleuthing and found clips of Letterman talking about the car with Jon Stewart in 1995, and lets us know that the "consensus ... is that Converse Engineering in Maine did the V8 conversions." The site sports a transcription of Dave and Jon discussing the events leading up to the car, a videoclip, tons of other links to the Volvos in question, and more! GO THERE NOW!
Posted by Michelle Souliere at 8:29 AM No comments: 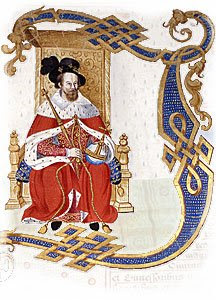 Maine.info's website has started hosting The Daily Maine Fact on their front page (formerly posted daily by AroundMaine.com). They don't have an archive, which is sad for folks like me, but every now and then I remember to look at it. Earlier this month, the fact-of-the-day was about letter writing in the early history of Maine.

The first letter ever sent from Maine went to King James I of England in 1607. It was dispatched on this date by George Popham, founder of a short-lived colony at the mouth of the Kennebec River. Popham ran to excess in praising both his monarch and the natural resources of the new land, which he claimed included nutmeg and cinnamon. (Source: Maine: A Literary Chronicle, W. Storrs Lee, editor. New York: Funk & Wagnalls, 1968)

The Maine Historical Society has extensive collections of Maine-related letters for those interested in digging further. Many of the documents are beginning to appear on the Maine Memory Network website, www.mainememory.net, as they are scanned and transcribed to make them more accessible to researchers. The Maine Memory collection is remarkable in that it collects documents from a wide variety of sources and makes them fully available in a number of formats for history sleuths.

Image shown is of King James I, in a letter (ha ha ha). Image source: http://www.kentarchives.org.uk/
Posted by Michelle Souliere at 3:53 PM 1 comment: 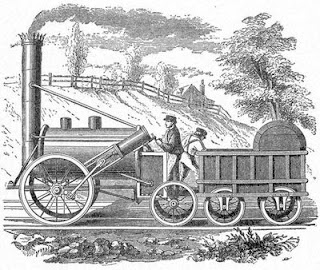 There is an interesting post about Maine Railroad Accident Reports from 1874 over on the MaineGenealogy blog. If this sample is any indication, Victorian era railroads were a bustling and fast-paced environment, and resulted in a wide range of serious injuries, usually ending in amputation or death. A surprising number of these were the result of simple slip-and-fall accidents.

The accounts themselves are quite interesting to read, such as this one:

January 16. The night express train from Boston was thrown from the track near Newport station, and ran along for a short distance, tearing up the rails and badly frightening the passengers. Frank Jackson, a brakeman, was thrown on to the ground with great violence and injured internally. Charles Estes, also brakeman, was thrown off and his ankle sprained. None of the 49 pass[e]ngers on board were injured.

MaineGenealogy blog has a wide range of these reports available in its archives, which can be found at http://www.mainegenealogy.net/blog.html.

If you're curious about current railroad accident figures, the Federal Railroad Administration's Office of Safety Analysis has a page that lets you run reports from railroads all over the country (you can specify time frames, specific states, etc). Click here to peruse their handy report-generating page.
Posted by Michelle Souliere at 2:32 PM No comments: 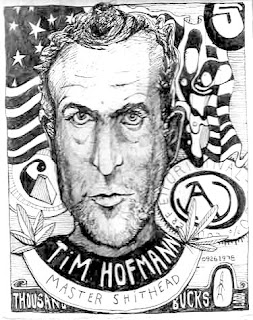 Normally stand-up comedy wouldn't have much of a place on the Strange Maine blog. However, there is an exception to be made, and that exception is for the one and only Tim Hofmann. [illustration by the man himself]

I became aware of Tim Hofmann when my zine, Baby Mandelbrot, held a Halloween writing contest to celebrate the release of our Halloween issue back in... let's see, I think it was 2003. The winner of the contest? One Tim Hofmann, who appeared at the release party at Casco Bay Books in costume (I believe perhaps it was as Vincent Van Gogh -- indeed, he had a bandage over one ear and appeared demented). Upon reading the story, I was baffled and amazed. It was peculiar and arresting, and the ending... well, it was unlike anything I'd read in local fiction, that's for sure.

And that is what I like so much about Hofmann. He is talented and unafraid to do what he wants to do, unafraid to offend or confuse. My second introduction to him was a small zine he self-published of comic strips that the Casco Bay Weekly had refused for publication. I still have my copy.

From Portland, Hofmann traveled all over the country, all the way to Alaska and Hawaii, at each stop honing his artistic skill, sending periodic missives to us back here in the homeland. And then he came back! So come see this guy. You just might be surprised.

Portland comic Tim Hofmann opens a new, monthly open mic comedy room at the Dogfish on December 14th. Free shows. Structured a little bit differently than other open mics, there will be one paid, featured comic per show. Hofmann hosts the show with original skits, stories and jokes. 8PM-10PM. Comics sign up at 7:30.

Out of curiosity, I poked around online to pull some more info about Hofmann up for everyone's entertainment, and would like to recommend the following:


Posted by Michelle Souliere at 8:01 PM No comments: 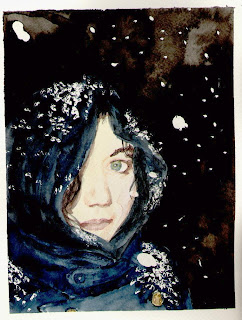 I apologize profusely for the fact that this went on for so long before I noticed it. I've been in the middle of moving house since late October, and have been unable to give the site the attention necessary to maintain a clean and normal atmosphere. Now I am relatively settled and things should be getting back to normal (ha!).

Again, many apologies, and a big THANK YOU to Ekido kai for pointing this out to me.