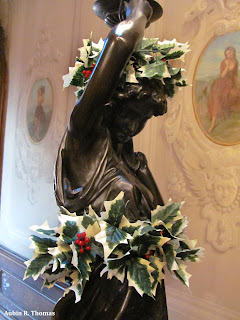 I would be remiss to wave a flag pointing all of you to pay a visit to Victoria Mansion's wonderful holiday adornment this year (even if I'm a little late in jumping on that particular bandwagon).

If the lack of snow disappointed you over December, then you are in luck, because the Mansion keeps its finery on through January 8th, 2012, before closing for the season. Step into a Victorian winter wonderland, revive your holiday spirit, and find a sense of wonder that you thought had passed with the years! 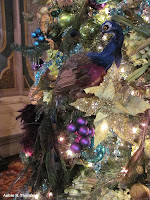 The holiday fantasia version of the Mansion happens each year when local decorators vie room-by-room for the admiration of visitors, unified in their efforts by an annual theme. This year, the overarching theme is "Deck the Halls: the Carols of Christmas," and the dozen areas encompassed in its rooms and passages portray ideals as varied as "It Came Upon A Midnight Clear" to "I Saw Three Ships Come Sailing By."

The photos shown here, taken by Aubin Thomas, give you just the barest hint of the decorations -- just a trifle to whet your appetite. There is nothing quite like entering the front door of the Mansion and finding the glimmer of its rooms and grand flying staircase sweeping before you with a promise of discovery around every corner.

For more information, please call them at (207)772-4841 or visit their website at http://www.victoriamansion.org/visit/default.aspx 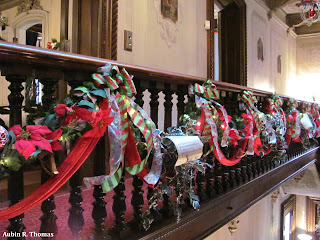 Posted by Michelle Souliere at 12:10 PM No comments:

The Portland Press Herald confirmed stories of an incursion of toxic black widow spiders in Maine. I've been hearing stories about these buggly uglies in recent years from friends working in local kitchens, but usually they are rumored to arrive in tomato shipments, not vertical launch system components!

BATH — Bath Iron Works says it had to fumigate a warehouse and part of a warship because a shipment of parts from California contained about two-dozen venomous black widow spiders.

Bath Iron Works employees discovered the arachnids in a crate containing vertical launch system components.
[...]
DeMartini said the spiders were discovered earlier this month. The shipyard is confident that exterminators eliminated any spiders that weren't stomped.
[...]

Oddly enough, the black widow spider showed up in an informational 1984 article in the Biddeford Journal (pg 9, 8/13/84), appropriately enough in the Science section, although Maine is not mentioned once in the article. The article did, however, describe the occasions in which one might be bitten, and the ensuing symptoms. In other words, do not go unwary into dry, dimly lit, secluded places, do not dangle your hand in their webs, and if you are a child, do not play with them! Even more oddly, another Maine mention of black widows occurred in... you guessed it!... the Biddeford Journal, this time way back on September 24, 1955 (pg 2). Again, no mention of Maine, and again an informational article. Maybe it was a slow news week? "Hey Marty! If ya got nothin' else to run, throw in a bit about poisonous spiders, will ya? That always gets 'em hoppin'." A random tiny paragraph telling of black widow bite symptoms appears in the midst of local news on page 2 of the Biddeford Journal in its 7/3/64 issue, too.

In the March 25, 1977 issue of the Biddeford Journal, the urban legend of black widow spiders in Bubble Yum bubblegum is recounted, including the fact that the company felt compelled to run full-page ads in 30 New York City metropolitan area newspapers telling parents "someone is telling your kids very bad lies about a very good gum." Apparently the company also went so far as to mail copies of the ads to school principals and PTAs (pg 5).

But the black widow has made actual forays into Maine before. Twenty years ago, in a 7/10/91 article in the Chicago Daily Herald (pg 40), picked up from the Reuters news feed from Portland, Maine, is a story about grocery chain Hannaford Bros. refusing further shipments of red seedless grapes from Southern California'a Coachella Valley "after two of the deadly spiders were discovered Monday in packing crates at its South Portland distribution center," and "a woman also reported a spider in grapes purchased at a store in Gorham two weeks ago," according to the 1991 article.

Anyone with their own Maine-related urban legends of black widow spiders is welcome to share them in the comments!

Photo from http://en.wikipedia.org/wiki/Latrodectus
Posted by Michelle Souliere at 11:27 PM 1 comment: