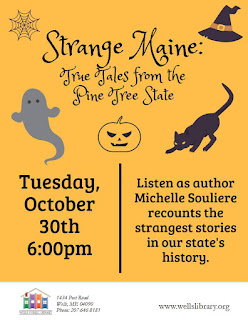 Posted by Michelle Souliere at 9:08 PM No comments:

Hi everyone! This post will run down the second day of the weekend's worth of speakers, and my photos will give you a glimpse of the folks involved, if you weren't able to be there. Click on any of the photos below to see a larger version of it.

If you missed the post about the first day's speakers, you can find that here:
http://strangemaine.blogspot.com/2018/09/report-international-cryptozoology.html

The 3rd Annual International Cryptozoology Conference was held on Sept. 1 & 2, 2018, here in Portland, Maine. Like the others before it, it was a great experience -- a chance to hear from experts on a variety of topics, and an opportunity to meet other people as interested in and as excited by the field of cryptozoology as I am.

Day 2 started with a very welcome announcement from Loren Coleman that there would be another conference in 2019.
[NOTE: There is a GoFundMe in progress to raise funds to assist with that now, with access to VIP tickets etc, at https://www.gofundme.com/cryptozoology-conference-2019]

This exciting news was followed by Colin Schneider, giving his talk "Bloodsucking Beasties & Shadowy Stalkers: A Study in Cryptid Predators."

Colin is one of the youngest cryptozoologist working in the field today. He is the representative for the Centre for Fortean Zoology in his home state of Ohio. You can find his blog here: http://paranorm101.blogspot.com/

Colin walked us through a smorgasbord of intriguing historic accounts of cryptozoological predators. Culprits included the inevitable Chupacabra, and lesser known ones such as the Vampire Beast of Bladenboro NC, the Abominable Chicken Man of El Reno OK, The Monument City Monster of Indiana, the Phantom Gobbler of Canton Township MI, and a number of other cases as well.

Various theories for each were explored, and Colin alerted the audience of hoaxy oddballs such as photos of bloody handprints and appropriated photos from unrelated incidents, just a few of the problems facing researchers using online sources to find information about these bygone cases and others. Always fact-check your sources, in other words!

Most often, these cryptid predators exhibit patterns related to either feline or canine predators. During the audience Q&A session following, fellow speaker Dawn Prince-Hughes asked if it was known whether habitat loss would trigger surplus killing (a common side-effect of these mystery creatures). A good question to puzzle over.

Next on the docket was Andy McGrath, traveling far to give us his take on the Beasts of Britain! 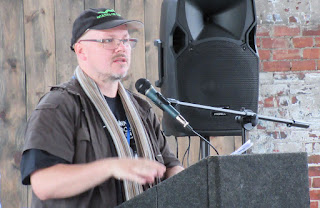 Although the UK is a closed system, so to speak, as it is predominantly a large island, that does not seem to restrict its variety of cryptozoological cases. For most of the talk, Andy focused on the water monster sightings, including multiple recent (August 2018) Loch Ness photos that have had UK cryptozoology fans very excited, earning 2018 the nickname "Year of the Dragon."

One thing was clear -- for those who think all the UK lake monster photos are from the 60s and 70s (or earlier), they are missing out on all the current ones! For examples you can look up Bownessie, the Dragon of the North, the River Aeron Monster, and the Plymouth Crocodile, among others.

From lake monsters Andy moved on to hairy ape men, again exhibiting a wide array of timeframes for historic traces and new evidence, from designs in heraldry and the Wodewose roof boss in Selby Abbey, N. Yorkshire, all the way up to the Box Hill Ape (2012) and Sussex Ape Man (2015). It should come as no surprise that UK Bigfoot cases are very controversial, and Andy pointed out that what some Bigfoot hunters may take as treesigns in the countryside could well be signals left by the existing gypsy communities traveling through out-of-the-way areas.

Another point of discussion was the spate of Dogmen sightings, which Andy postulated may just be a way of re-branding the werewolf tradition to make it seem less embarrassing, more modern and believable. All in all, a lot was packed in to his talk! You can find him online at http://beastsofbritain.blogspot.com/ or on Facebook. 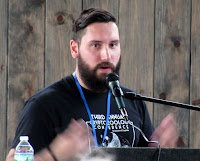 Next up was Aleksandar Petakov, who gave a terrific account of his latest work, filming the documentary Champ, about the legendary monster of Lake Champlain, as presented by Small Town Monsters. Katy Elizabeth, founder of Champ Search, stepped in and added her own viewpoint about investigating this particular lake monster.

He spoke about the principles that motivate his filmwork, and how important it is to go to the site of the events being documented, and the vitalness of allowing eyewitnesses to speak for themselves. He is a firm believer that you should not try to influence their telling of their account; it should not be scripted. You will find his website at petakovmedia.com, and Small Town Monsters at https://www.smalltownmonsters.com/ 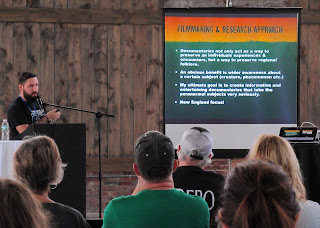 Next was my talk about Bigfoot in Maine. I almost skipped myself here, because I didn't have any notes about the talk, being in the process of giving it at the time. Ha! 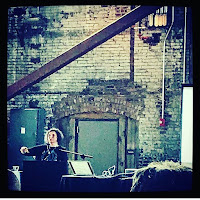 This talk was the first time I had attempted to summarize everything I've learned from talking to eyewitnesses about their encounters with inexplicable hairy hominids in the state of Maine, from York County all the way up to Aroostook County. I talked about the environment and biology of large mammals in Maine -- what makes anyone think they might be here, and how they could survive. In short, the potential is clear for anyone who has studied Maine's known large mammal species, such as the black bear.

I followed this with examples of incidents from my files, to give the audience a feel for what these Mainers have encountered in the wild and in their back yards. Lastly, I summed up what we know from these accounts -- appearance, eating habits, where encounters have occurred, behavior, etc. All of this will be in my book, which I'm finishing up in 2018. I hope to have it in the publisher's hands by the beginning of 2019. Stay tuned! If you want to stay up to date with my Strange Maine work, you can also follow my site on Facebook: https://www.facebook.com/strangemainebook 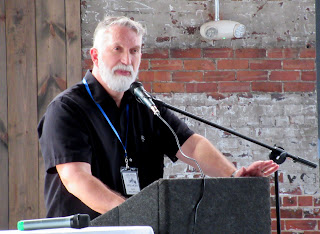 Last but certainly not least, the final speaker of the conference was Dr. Jeff Meldrum, a name well-known to anyone with a serious interest in the field of primate cryptozoology. Dr. Meldrum spoke about the Patterson-Gimlin footage, and why he believes it remains the most compelling photographic evidence to date, attesting to the physicality of a biological entity, and providing a baseline from which to establish a scientific context. 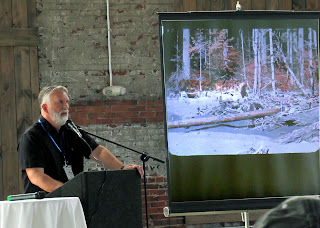 He spoke about the shifts that have occurred in views of evolution and anthropology, and how the old paradigm of the field caused preconceptions, which in turn conditioned the collection of evidence for decades. Newer paradigms are slowly coming into place, causing the reexamination of available information. The taxonomy in the field is rapidly changing and readjusting to discoveries initiated by these reevaluations. 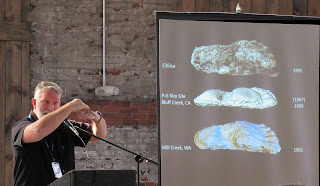 Dr. Meldrum also demonstrated his theories of possible hominid foot anatomy, as footprint casts and footprint fossils are among the few forms of evidence being brought forward for examination. Another anatomical aspect he discussed was the deep jaws and flat face (also visible in the Patterson-Gimlin footage), which he postulated to hold massive molars, smaller incisors and cuspids. As he explained, their teeth are their primary tools/utensils. Such a large jaw, with its accompanying massive musculature and the cheekbones housing it, would necessarily obscure the visibility of neck vertebrae, creating the famous "no neck" look ascribed to mystery hominids.

All in all it was a fascinating talk, which gave the audience much to think upon.

The weekend was terrific! I met a lot of interesting folks, both fellow speakers and conference attendees, and also caught up with many friends I hadn't seen in ages. 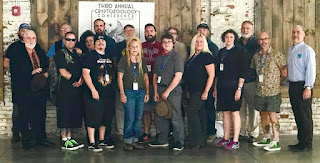 After all was said and done, I still had time to go over and check out the latest additions of the International Cryptozoology Museum, just across from the conference location. I also got to catch up with my old friend and neighbor, the Crookston Bigfoot. 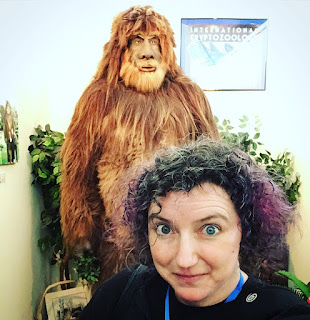 I hope this has given those of you unable to attend the conference a glimpse at what went on. Maybe we'll see you there next year!
Posted by Michelle Souliere at 9:40 PM No comments:

Posted by Michelle Souliere at 3:09 PM No comments: