My friend Rachel runs the great Smother of One blog, and just did a post which contains a couple of interesting things, not the least of which is the footage of strange curtain movements that occurred at the Empire club here in Portland and freaked a number of employees out, shown on their website as taken off their closed circuit taping system's monitor (see below).


Find more videos like this on Empire Dine and Dance

Posted by Michelle Souliere at 10:41 AM No comments:

Sunny side up in Portland 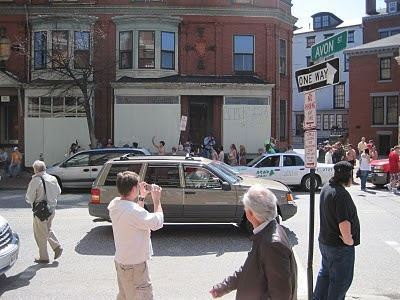 Well, the topless march we posted about earlier definitely went down today as planned, and attracted a lot of spectators (no surprise there), in spite of some who thought it was just an April Fool's Day joke.

Overall, the crowd was happy and ebullient, and there was a lot of cheering as the small group of shirtless men and women marched from Longfellow Square down Congress Street, heading for Monument Square.  It also attracted a LOT of men with cameras. 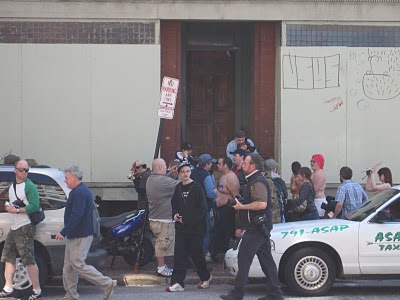 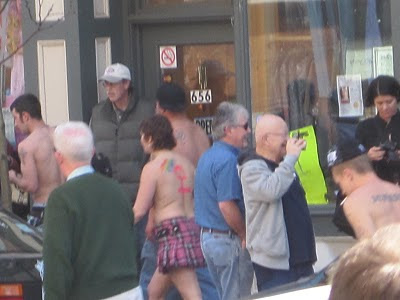 The most obvious response?  The guys with cameras were not NEARLY as interested in the half-naked men.

But I think everyone had fun, and it definitely made folks really think about what the heck makes barebreasted females unacceptable.  Think it's illegal in Portland?  Guess again!  Here's an interesting article by the ever-well-spoken Bill Nemitz, over at the Portland Press Herald:
http://www.pressherald.com/news/full-exposure-of-their-___-principles_2010-03-28.html


Calls last week to Portland City Hall and the Cumberland County District Attorney's office confirmed that while it is illegal for men and women to expose their genitals in public, local and state laws contain no such prohibition on uncovered breasts – male or female. (Although, considering some of the men who insist on parading around topless, one could argue that there should be.)

Maine, in fact, is one of a handful of "top-free" states that have no laws banning breast exposure, according to the national organization gotopless.org. The group lists the others as Hawaii, New York, Ohio, Texas and the "coast of California."
[Source] 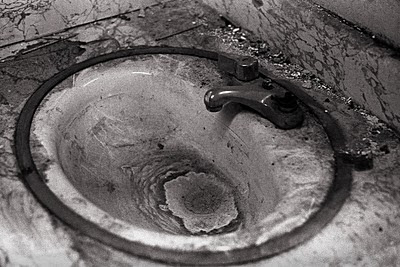 Fans of urban exploration will recognize the wonder that comes in small discoveries such as the one in this photo. To quote: "This used to be a fancy marble-lined bathroom in a below-ground shopping concourse. The tower above is still active and occupied, but the old 1930's-era shops in the network of basements below it have been converted to storage or left to crumble away."

This is one of a continuing series of local photos by the prolific Portland photographer Eric Pomorski. I highly recommend looking through his photostream on Flickr.com -- it is well worth it! He has an excellent eye.
Posted by Michelle Souliere at 2:25 PM No comments:

April Fools in the news! 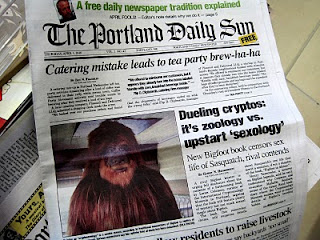 Well, Portland's free newspapers are having a field day with April Fool's Day! Make sure to find a copy of the Portland Daily Sun, or of the Munjoy Hill Observer (a copy of which some kind person left tucked in my door this morning, thank you!). 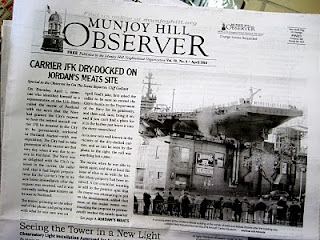 From battles over censorship of Bigfoot sexuality, to the landing of the carrier JFK on top of the defunct Jordan's Meats plant in downtown Portland (as opposed to the harbor where one would normally expect large ships to park themselves), it's a bonanza that shouldn't be missed!!!  The April 1 issue of the Portland Daily Sun is available online in an e-edition here.
Posted by Michelle Souliere at 1:13 PM No comments: