If you can't make the premiere tonight, there are showings later in October! Check out the list at http://www.damnationland.com/screenings/

Tonight, Portland’s State Theatre proudly hosts the world premiere of seven short Maine-made films as part of an annual showcase titled Damnationland: The Way Life Should Bleed. The program —- in its fifth year—presents genre-defying original works from Maine filmmakers that redefine the classic thriller and horror categories, leaning toward visions that are surreal, comedic, and artful, while still providing scares, shocks, and surprises.

The world premiere will begin with an opening reception at 7pm, and includes live music, mingling with the filmmakers and casts of the films, and merchandise for sale. Before the films start, performance artist Aquarius Funkk and ensemble will warm up the crowd with an original piece about corporate hunger and greed. Then at 8pm the program will begin, followed by a talkback from the filmmakers, moderated by the producers. While these films are not rated, they do contain strong language and depictions of violence, and therefore may not be appropriate for younger children or sensitive viewers. Tickets are $10 in advance, $12 at the door, and $5 for students. Information about purchasing advance tickets can be found at the State Theatre website: http://statetheatreportland.com/

-------------------------
October 17 and 18: Lynne Cullen tells Tales of Terror at Victoria Mansion in Portland! Lynne and her concertina celebrate eight years of scaring the #$%&# out of people! Come hear two classics of Victorian horror, plus a children's show of spooky folktales for the early Saturday show. FMI: http://victoriamansion.org/ This year, Ms. Cullen will feature the works of Sheridan Le Fanu and Lucy Clifford, renowned 19th century horror writers whose works still influence the genre today. These shows are at 6:30 & 8:30 on Friday and 8:30 on Saturday.
The 8:30 performance on Friday has sold out.

A special children's performance (recommended for attendees 12 and under) will be held at 6:30 on Saturday featuring folk tales from around the world.

or if you can't make these storytelling nights, try Monday! 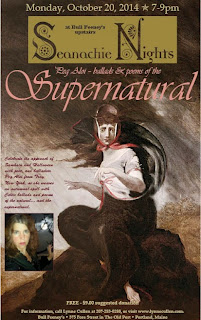 On Monday, October 20, balladeer Peg Aloi will share ballads and poetry in a celebration of Samhain.

The 31st of October is known as "Samhain" in the British Isles: Scottish Gaelic for "summer's end." But it's also believed to be a time when the worlds of the living and the dead grow closer. Traditional singer and poet Peg Aloi will share songs and words about autumn, eerie landscapes, witches, ghosts and other fare suited to the season.

Peg Aloi is a traditional singer from Troy, NY, who has sung and recorded music with a number of groups throughout New England. She has also hosted open mics and bardic circles via the pagan festival circuit for several years.

The Entertainment Experiment presents two popular Maine-made web series screening at the Alamo Theatre in Bucksport Maine on October 18th. Check out the complete final season of the award-winning supernatural murder mystery Ragged Isle and a special episode of the exciting ghost hunting series Haunt ME shot at Fort Knox! This will be the first place you'll be able to see the series finale of Ragged Isle. We hope you can join us and be a part of Maine web series history! More details to follow. for more information on Ragged Isle and Haunt ME, check out the online network The Entertainment Experiment at www.entertainmentexperiment.com 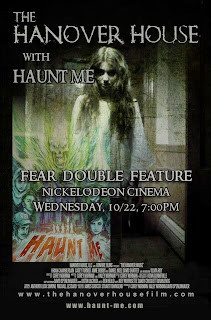 Come to this very special ONE NIGHT ONLY double feature to kick Halloween week off right. Join us for HANOVER HOUSE, with special guest openers HAUNT ME, showing their second season episode "The Moon (Mill Agent's House)".

HANOVER HOUSE: Returning from his father’s funeral, Robert Foster is faced with the unimaginable; he hits a young girl with his car. In a desperate attempt to save her life, he seeks help at a nearby farmhouse. Little does Robert know that the house has been waiting for him his entire life. Once inside its walls, Robert must overcome his own personal demon’s in an attempt to save both his wife and himself. But there’s a problem, only one may leave The Hanover House alive.

Posted by Michelle Souliere at 4:45 PM No comments: