Just before noon today I was on my way to open the Green Hand Bookshop, and a friend ran by, telling me that the High Street side of the State Theater building was collapsing. On arriving at the corner of High and Congress Streets, it looked better than I had imagined. You can click on the photos to see more detail. 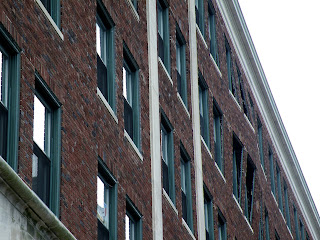 She also reported hearsay from other building tenants that there had been a small explosion that morning (a jeweler's torch tank? it seemed possible on first consideration with all the artist studios in there), which would explain how centralized the incident was. However, another friend did point out that none of the windows are broken, which would belie that explanation.  Another person has stated since that the loud "CRACK!" could have simply been the facade forcibly separating from the structure.  Architect Tom Hitchins had this to say, after looking at the photos:

"Basically what you have there is a brick veneer coming loose from the structural wall, which seems to be intact. The fact that the windows aren't broken is another good sign. Brick veneers are often secured to the structural wall with metal brick ties, leaving an air space between brick and wall for moisture control (brick and mortar are porous). Sometimes, as the building ages, particularly if there isn't adequate drainage between the veneer and the wall, moisture can build up and corrode the brick ties which causes them to fail, leading to situations like this. It's a bit messy, and may require the brick skin to be redone but structurally the building is probably sound."

Since then another person has weighed in (see comment below) with information that a few years ago all the jewelers in the building's studios were told they could no longer have tanks on the premises.

The most recent word is that they have workmen up there with crowbars levering bricks out one by one.

Any more demolition engineers out there want to weigh in? [NOTE: The above paragraphs updated as info comes in.] 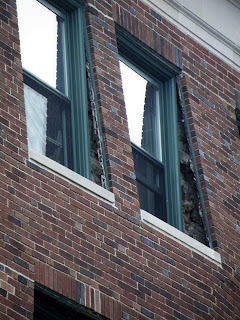 You can see it is primarily the facade layer of bricks that was affected, which hopefully means good things for the building's infrastructure, which was my first worry (I'm sure I wasn't alone in that!). Here in Portland we have watched the new owners slave over improving that building through the last few years, and none of us wants them to fail. The State Theater building is a huge cornerstone of the Arts District. 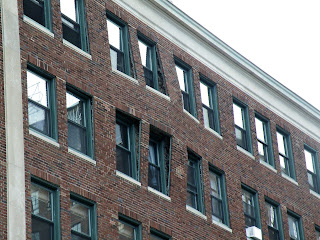 A small crowd had gathered in Congress Square Plaza to observe the state of the building, as well as higher-ups from the Portland Police and Fire Departments, and a smattering of news video cameras. 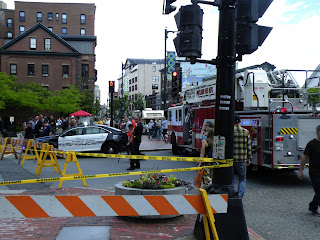 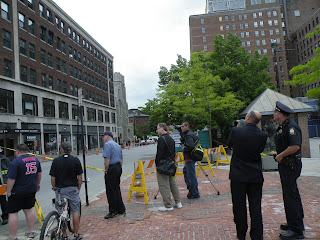 All this madness, of course, is piled on top of the already busy day. This Sunday in June is when the Old Port Festival is held, which adds tens of thousands of visitors to the already busy city traffic. In fact, on arriving intown this morning, I assumed the fire truck blocking High Street was part of an Old Port Festival related traffic arrangement. Many others probably did the same.

Another source reported hearsay that there were small chunks of masonry falling onto the sidewalk, which prompted a call from a watchful citizen who happened to be passing by. They looked up and noticed the bulge in the wall and called the city immediately. Thanks, whoever you are! In this photo you can see the remains of the detritus: 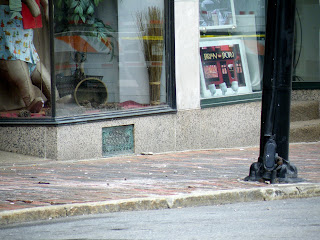