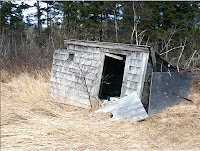 Back in May I received an email from Ryan Prescott, one of a group of 8th-graders who live in the Machias area. He had read the Strange Maine article about the hamlet of Freeman, and thought I might be interested in what they were up to. They've taken it upon themselves to start documenting abandoned locations in their area, and are calling their project Abandonment of Maine. This is how it starts, folks! You get bitten by the bug, early or late, and the rest is history. Literally and figuratively!

Their website is:
http://www.abandonmentme.tk/
You can also check out their videos on YouTube (there are 5 of them up at the time I'm posting this):
http://www.youtube.com/abandonmentofmaine

The videos are raw, though well-edited, and basically allow you to walk with them along and through the areas they are investigating -- because they are not just looking at properties, they are also looking at old roads left to grow wild, another facet of the Maine historic world. These guys are getting out in the field and seeing what they can find, which few of us take the opportunity to actually do. Of course they get so excited sometimes about what they're encountering that they forget what they're doing with the camera, but who can blame them for that?!

The area they're exploring is mostly in walking distance of where they live, in part because of current gas prices (Ryan didn't want to have his parents drag him around, spending all that money). But the on-foot approach definitely has other advantages -- you really do get to see everything at a ground-level that driving investigators miss, from the long, gradual approach to the site, to the details often buried in the landscape around you.

After the initial e-mail from Ryan, I checked out their videos. At that time there were only a few episodes up, but it was enough to whet my appetite. I decided to shoot a few interview questions off to Ryan, and he was obliging enough to respond.

Q: What made you grab your camera and start doing this project?
I thought it might be a good idea to document by fascination not only because I love filming but also because I thought maybe others would like the concept as well.

Q: What is the strangest thing you've ever found out there?
When I was exploring the Uffelman residence remains, I noticed something odd in a small ditch. I thought it might have been a bone since it was hollow but when I got a closer look it was the head of a baby doll. The time it had spent in the weather had completely blackened its eyes.

Q: Have you ever encountered anything bizarre that you really couldn't explain away?
Not yet, but I am definitely hoping to.

Q: What town are you guys based out of?
Most of us are from East Machias.

Since the third episode, we've asked permission from all owners. (We have since learned that the house first featured in episode 3 is being sold for well over $160,000. If we were blamed for the vandalism we would be on some thin ice.)

Posted by Michelle Souliere at 7:23 PM No comments:

The weather was perfect for today's annual Zombie Kickball game which took place on the Eastern Prom.  When I arrived the field was covered with zombies, but there was some confusion as one of the dugouts held a kids baseball team waiting to use the field.  But zombies have a way of triumphing over humans even when they aren't eating their faces.   The zombies had reserved the field.  So after watching the blood covered dead stumble around for awhile, the kids baseball team eventually wandered off.

The zombie turn out was smaller this year than in previous years, although there was a large crowd of spectators.  Not sure whether the lack of zombies had anything to do with being scheduled on the same day as the Old Port Festival or not, but both teams were fairly small and play was mostly in the infield.  There seemed to be a larger contingent of younger zombies.  Also it was good to see some familiar faces from previous years.

If you missed out on the fun, here are a few photos.