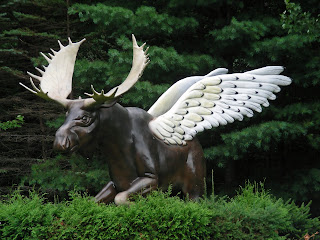 WHAT: ‘Midnight Explore’ PWA Benefit at haunted house
WHEN: Saturday, Aug. 13, 2011 -- 9:00pm to 2:00am
COST: $45 per person. A light buffet and a donation to the Pemaquid Watershed Association is included in the fee.
RSVP: Spaces are limited. Please contact Red Cloak Haunted History Tours ASAP at (207)380-3806 or redcloaktours@gmail.com to register for the event.

Heavy footsteps on an empty stairway and an ethereal mist that passes through darkened hallways can be a bit unnerving, but a ghost that knows you by name? Now that’s just downright creepy, say employees at Salt Bay Café in Damariscotta.

“That’s a very interesting paranormal manifestation; it implies that the presence has an understanding of its present circumstances,” said Sally Lobkowicz, the Director of Red Cloak Haunted History Tours. “Yet there are two employees who say they have been called by name when there is no one in the area, with one of the employees reporting two incidents.”

It’s a good reason for further investigation, which is why Red Cloak Haunted History Tours is hosting a Midnight Explore at the Main St., Damariscotta building that houses Salt Bay Café, the Damariscotta Region Chamber of Commerce (DRCC) and the Pemaquid Watershed Association (PWA). The Midnight Explore will take place on Saturday, Aug. 13 – a full moon night.

A portion of the proceeds generated by the event will go to benefit the PWA, which has the mission of conserving the natural resources of the Pemaquid Peninsula through land and water stewardship and education.

The Midnight Explore invites guests to participate in actual evidence collection activities, such as using meters to identify areas of electromagnetic field (EMF) activity (thought by some to be associated with a paranormal presence), using a digital recorder to pick up electronic voice phenomenon (EVP), and using video and still cameras to capture unusual images.

Equipment such as the EMF detectors, the EVP recorder, a digital movie camera and other assorted gear will be provided by Red Cloak Haunted History Tours, along with training on how to use them. (Participants are encouraged to bring their own cameras and any equipment they may have.) The group will be split into teams to explore the building and, hopefully, collect evidence that will shed light on some of the reported paranormal activity at the location.

Whether or not any evidence reveals itself, there’s no shortage of reports regarding paranormal activity at the building. According to Salt Bay Café owner Peter Everett, late night and early morning incidents began occurring shortly after he purchased the business in the late 1990’s.

Often, a side door was heard to open and close, followed by heavy footsteps moving up the stairs and into the second floor of the restaurant. Employees who thought they were working alone in an empty building would go to investigate, and find no indication that anyone had entered. These occurrences were so common that over the years most employees have come to take them in stride.

But some reports are bit more disturbing. The first report of an employee called by name was over 5 years ago, but that manifestation has continued into the present with another employee who has heard name called out twice – as though the person were right behind her – in a completely empty room. As recently as July 3 Peter Everett reported that he was alone at the end of the night in the upstairs office when he observed a vertical mist pass through the room and disappear through a wall.

Several years ago, a guest on a Red Cloak Haunted History Tour photographed an unexplained image that appears to be an energy bolt emanating from the roof of the building. The image was captured by the camera, but was unseen by the photographer.

The potential source for these manifestations is not apparent from the building’s historical record. The structure was built in 1810 for Rufus Flye and in more recent times was the home of Dr. Parsons. Perhaps the most unique aspect of the building is that it has changed position since it was built. In 1980 the original house was lifted off its foundation and turned sideways to allow space for the Damariscotta Bank & Trust driveway. So, the front of the present day building was the side of the original building. The Mainway Café opened there some 24 years ago, and later became the Salt Bay Café.

“This will be a great opportunity in that we will exploring all three floors of this unique building, which has a long and solid history of manifestations,” Lobkowicz said.

The fee for the Midnight Explore, which includes the light buffet, is $45 per person. A donation to the PWA is included in the fee. The group’s size is limited due to both the size of the building and the availability of equipment, so reservations will be accepted on a first come, first serve basis. To make reservations, or for more information, contact Red Cloak Haunted History Tours at (207)380-3806 or redcloaktours@gmail.com

If you can't make this event, but are interested in knowing more about local history, other Red Cloak tours tours have been ongoing since July and will run through through October. Their website is www.redcloakhauntedhistorytours.com, or you can reach them at (207)380-3806.

They regularly hold tours in Bath, Boothbay Harbor, Camden, Wiscasset and Damariscotta, by reservation only.

For more information on unusual images in photos, check the “Ghostly Sightings” section at www.RedCloakHauntedHistoryTours.com.