Winslow Homer and his view of the stark Maine landscape

Just a heads-up -- if you haven't been to the Maine Maritime Museum, now would be an excellent time to go!

Artist Zach Horn contacted me and mentioned his intriguing take on Winslow Homer, on exhibit now through November 27, 2022 at the museum (alongside other great exhibits!).

The show, called "Looking for Winslow Homer," is a combination of installation, painting, and stop motion animation. Zach's work is about the metaphysical connection to place.  Winslow Homer was observant and expressive enough in his work to be able to capture the unique "self" of the Maine landscape in all its guises, from pastoral to dramatic, from simple to overwhelming.  You can find info about the show here:

If you'd like to check out the museum but miss the show, here's the link to their website for hours, etc.:
https://www.mainemaritimemuseum.org/

OR if you happen to be in Vermont and not in Maine, Zach is also putting together another very intriguing artshow I'm sure you'll all love, an exhibition about inexplicable occurrences which will be on display at the Bennington Museum this fall, called "In the Shadow of the Hills."

Here's one of many stunning Winslow Homer's out there in the world, many of which are held at the Portland Museum of Art:

Posted by Michelle Souliere at 1:48 PM No comments:

Okay, things have been pretty quiet here on the blog while I've been working away at interviews and research, but this little tidbit is too exciting not to talk about.

Back when I was a little kid, my family used to drive down to Biddeford regularly to visit with all our cousins, aunts and uncles.  If we took US Route 1, we would drive past the corridor where Funtown and Aquaboggan lived, in Saco, and I would always stare out the window and wonder about the creepy-looking house that backed onto Route 1 in front of Funtown.

Years later, I found out that it wasn't just an abandoned house in the middle of all that summer fun -- it was actually a local haunt attraction!  Back when I was little I wouldn't have dared go in, after getting the junk scared out of me at a local haunted house put on by one of the TV stations here in Portland (maybe WGME? I think it was out by the Northgate shopping center at Allen and Washington Aves).  But as a teenager, my little goth self was very intrigued, but was rarely out that way on my own.  The Haunted Mansion was shut down in 1996 as Funtown began tightening up on potential risk factors at the amusement park.

Now, according to a post on WCYY (source: https://wcyy.com/funtown-hints-at-the-return-of-the-haunted-mansion-in-2023/), there are hints that Funtown is going to resuscitate the long-dead attraction, and resurrect the Haunted Mansion -- or something scary, at least.  HOW COOL WOULD THAT BE??? 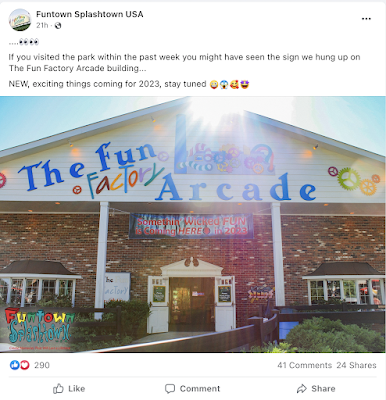 If you never knew the Haunted Mansion, or are curious about it, there used to be a great website run by Dave Gagne, one of the many folks who worked there over the years who loved the attraction, but unfortunately thehauntedmansion.org appears to be defunct.  So you'll have to make do with WCYY's post about it here: https://wcyy.com/long-lost-attraction-the-infamous-haunted-mansion-at-funtown-in-saco-maine/

Here's hoping we'll get a new local haunt attraction out of these rumblings from the grave!!!

Posted by Michelle Souliere at 2:23 PM No comments: