It's that time again!

The Festival of the Sacred & Profane is unfolding on Peaks Island this Saturday, September 29th. This year there are no advance sales of tickets. Simply buy them from the festival ticket-sellers on Saturday when you arrive on Peaks Island.

Be sure to catch the 2:15 ferry to Peaks from the Casco Bay Lines terminal in Portland, or if you're already on the island, get them by showing up at the Peaks Island dock when the ferry lands at 2:35pm.

True to form, the festival takes place on the very day of the full Harvest Moon this year. If you're staying on the island overnight with friends, you can see the full moon at 11:19 pm!

If you'd like to print out a map of Peaks, you can access a PDF showing the roads and major landmarks on the island here, on the Peaks Island website (their General Island map):
http://www.peaksisland.info/land_use_maps.htm

Each year the festival is different. While you are there, it is different every moment. Get ready, but don't prepare.

Have fun, everyone!!!
Posted by Michelle Souliere at 12:49 PM No comments: 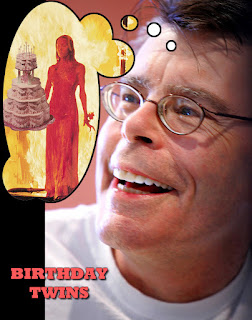 As some of you obsessed Stephen King fans may know, today (September 21st) is Mr. King's 65th birthday. What I didn't know until recently (though all of you uber King geeks probably did) is that it is also Carrie White's birthday! Talk about a fire hazard!!!

Yes, it's true -- Stephen King gave the focal character of his first published novel the same birthday as himself. Honestly, what a neat idea.

Well, I know we've all seen far too many iffy Carrie remakes, and a musical to boot, come out of the franchise of the much-loved novel. But they're doing it again. If you're like me, you're always willing to watch a remake, even though they're frequently disastrous. Why? Because every now and then someone gets something about it right, and you get a new piece to add to the canon. And if they get it wrong, there's a fair amount of entertainment to be had in tearing it down.

I'll be clear here. No one is ever going to replace the De Palma 1976 original. That Carrie stands on a burning pedestal for all to see, as far as I'm concerned.

But the new version of Carrie, has a few things going for it.

-- The lead role will be played by Chloë Grace Moretz, who played Hit-Girl in “Kick-Ass,” where she did just that. It will be interesting to see her try to convey that same rage and violence with purely psychic backlash. It should be a real test of her acting skills.

-- We all know Julianne Moore, who will have an interesting challenge in the role of Carrie's mother.

-- The scriptwriter is Roberto Aguirre-Sacasa, who has recently worked with King's material by writing the comic book adaptation of “The Stand.”

The film will be released to theaters in 2013.

Those of you lucky enough to be attending the NYC ComiCon next month will get a chance to see previews and panel discussions about the film (alongside similar treatment for Sony's other upcoming remake, that of the EVIL DEAD).

Okay. Maybe it's a shameless ploy to promote the new remake of Carrie by Sony and MGM. But I still think the birthday twins thing is really cool.

Here's a link to the official movie page on Facebook:
https://www.facebook.com/CarrieMovie
Posted by Michelle Souliere at 2:31 PM No comments: