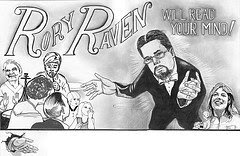 Well, okay, actually he will READ your mind. But it might be a mind-blowing experience.

Check out Mr. Raven's delightful website at http://www.roryraven.com/! Do not be deceived by imposters!

Greetings! Welcome to the Theater of the Mind. I am Rory Raven, Your Host. I am a mentalist with over a dozen years' experience reading minds and astonishing audiences. Neither a psychic nor a magician, I offer a new and compelling kind of entertainment unlike anything you've ever seen. With a few simple props (paper and pencil, a pack of playing cards, some paperback books, and the thoughts of some volunteers) I involve the audience in a highly unusual -- and unusually entertaining! -- experience. Thoughts are revealed, predictions come true, and perhaps even the spirits are summoned ....
St. Lawrence Theater Manager's note: When Rory Raven was here last, the audience was so stunned by his abilities that we were all speechless! We have spent the last few months trying to figure out exactly what happened that night. Not for the faint of heart! 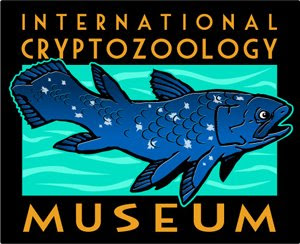 My blogging has suffered lately due to a recent, unexpected moving-of-house, but I would be remiss to lose a chance to remind folks of this very important event, a huge effort to assist our own Loren Coleman in his work to open a more public version of his International Cryptozoology Museum!

If you are unable to attend, you can still donate. Just use the mailing address given below, or scroll down to the bottom of this post to click on the blank PayPal button to do it electronically.

Here is more detailed information about the event from his post on Cryptomundo:

A wonderful groundbreaking event to support the International Cryptozoology Museum has been planned by Boston comedian Shawn Donovan.

Coming on Saturday, November 22, 2008, at the Empire Lounge on Congress Street, downtown Portland, Maine, the “Bene-foot: A Comedy Benefit for the Cryptozoology Museum” will kick off at 8 PM.

Besides Shawn, who has been part of the Boston Comedy Festival for the last 3 years, the other comedians confirmed to be performing will be Paul Nardizzi (Late Night w/Conan O’Brien, Comedy Central) and Dan Sally (Comedy Central, Just For Laughs). Shawn told a popular comedy forum this morning that he would “leave it up to Sally to bump with the Patterson/Gimlin film.”

“Bene-foot: A Comedy Benefit for the Cryptozoology Museum” is being held to support the museum, and all proceeds go to the museum. No corporate fiscal umbrellas in the mix here. Although tickets can be bought at the door for $25, I’m going to begin selling tickets online via my PayPal account and through the mail at a pre-event discount.

Here’s the rundown for ticket sales:

Pre-event tickets plus a signed book by Loren Coleman = $45.00/one ticket/one book.

One of eight tickets to the VIP table, $100 per ticket.

Special to someone, have dinner with Loren Coleman, $250.00, before the Bene-Foot or perhaps at a time convenient to you.

Additional donations to the Bene-Foot, $25 to $1000, will be appreciated for the museum fund. Use PayPal or the mailing addresses above. DO NOT use the PayPal button for Cryptomundo on the upper right corner on this page. Use the instructions above for funds, thank you.

Shawn is also taking donations for raffle items that will be announced closer to the event (gift certificates to eating and entertainment locations to objects you wish to donate are what he is thinking about).

Further details on event poster art, possible tee-shirts and more will be forthcoming.

All donations are greatly appreciated, and they are not tax deductible due to the home museum not being a 501(c).

View his original post for video clips of the performers and more: Source

You can click the blank button below to link to PayPal to donate to the museum:

Posted by Michelle Souliere at 2:13 PM No comments: 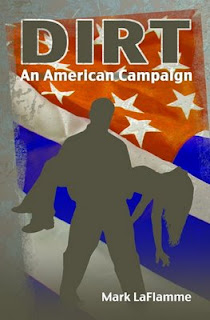 Graveyards, resurrected love, backroads intrigue – these ingredients cause no great stretch of the imagination for a confessed fan of fellow Mainer, Stephen King, and his predecessors, including Edgar Allan Poe.

Like King, LaFlamme is a tricky writer. He lures you in by seeming ordinary, but there is something residing in his texts, in his characters’ dialogues and inner monologues, that goes beyond that threshold of normalcy and expectations. Before I know it, he’s got me again. This is not an unhappy thing. The pages have to be turned, but this is a pleasure, as the story plays out before me – he’s done all the work. I cannot turn away until finally I reach the end.

This was true of the first LaFlamme book I read, The Pink Room, and remains true of his latest, Dirt. What makes this guy from Lewiston such a crafter of thought-provoking page-turners? I can only guess that it’s this – he is not afraid of hard work. This is a man who spends day and night pounding the crime beat for the Lewiston Sun Journal. Off the news desk, he writes books and short stories, which the rest of us get to read. He is not going to waste our time.

The greater world hasn’t picked up on him yet. He’s still mostly ours at this point, here in the state of Maine. This doesn’t stop him from weaving more widely traveled threads into his work.

In Dirt, LaFlamme focuses through the lens of the all-too-familiar worldview of the American Presidential campaign. Don’t look for the all-American glamour that comes from power in this story. It’s buried under dirt.

Maine Governor Frank F. Cotton is raging up through the ranks as a distinguished contender for the Republican nomination. His image is that of hardy Maine stock, hard-working, honest, stern but engaging. The press knows his son Calvin as a recent widower and a staunch white-collar environmentalist, a lawyer who pushes back against the big boys his father pals around with. What the press doesn’t know, and what Frank Cotton doesn’t want them to find out, is that his grieving son is also unable to wrap his mind around the death of his wife, Bethany.

While Frank Cotton has been running his campaign state to state across the country, Calvin Cotton has very quietly lost his mind, and fetched his lovely bride from her funereal box for one last lovely New England winter getaway.

It is Thomas Cashman’s job to fetch them both back, as privately as possible. He can’t think of anyone better to help than Billy Baylor. In his role as best-selling novelist, Baylor explored the theme of love after death thoroughly and repeatedly, until his career was interrupted by the death of his wife and young daughter in a random accident. Since then, Baylor hasn’t had much of a thought about anything but misery and beer.

Governor Cotton calls Cashman. Cashman finds Baylor. Together they track Calvin and Bethany, with the hounds of the press at their heels.

I won’t ruin it for you – read it yourself.
Posted by Michelle Souliere at 6:00 PM 3 comments: 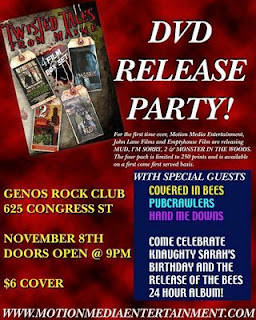 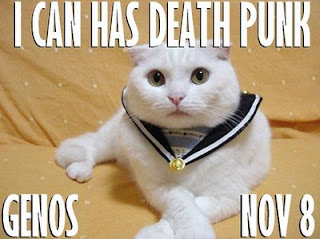 Covered in Bees will be celebrating the release of their outrageous 24-Hour Album, as well as their participation in creating the soundtrack for the zombie film "2", included in the DVD 4-pack. Playing with them will be two other ever-rowdy and fun-loving bands, The Pubcrawlers and the Hand Me Downs. Top it all off by helping Knaughty Sarah celebrate her birthday!

Click here for more about the DVD set, which includes the films MUD, I'M SORRY, 2, and MONSTER IN THE WOODS (best Maine Bigfoot rampage ever)!

Posted by Michelle Souliere at 10:30 AM No comments: 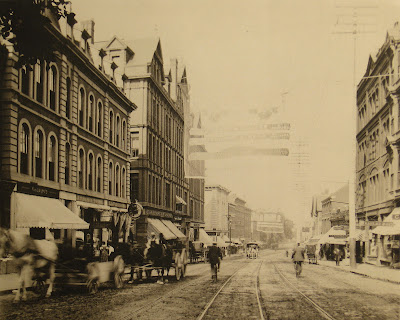 -as a thoughtful diversion today, here's yet another mystery photo. Can you guess where this was taken ???
Posted by speculator at 11:05 AM 5 comments: