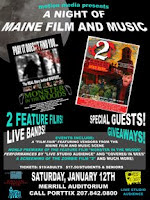 "MONSTER IN THE WOODS PREMIERES AT NIGHT OF MAINE FILM AND MUSIC2 FILMS, 2 BANDS, AND A FILM FAIR AT THE MERRILL AUDITORIUM

On Saturday January 12th 2008, Motion Media, a Maine Entertainment Company, in association with John Lane Films and Emptyhouse Film, presents "A Night of Maine Film and Music" at the Merrill Auditorium in Portland Maine.

The events of the night include a film fair featuring various vendors from the Maine film and music community. The Film Fair will be followed by a performance by local musicians LIVE STUDIO AUDIENCE, then, the world premiere of the horror/comedy MONSTER IN THE WOODS. The film will be followed with a performance by COVERED IN BEES and capping off the night, a screening of the zombie film "2".

"Monster in the Woods" tells the story of two Cryptozoologists sent to the remote backwoods of Maine to try and track down the elusive Bigfoot. All hell breaks loose when a high stakes reward is offered for the capture of the creature- dead or alive, and the Cryptozoologists race against time to try and maintain the beasts' safety. Click here to see a trailer for the film.

The zombie film "2" tells the tale of two survivors of a bio-terrorist attack that has turned everyone around them into zombies. Both films are feature length and contain adult content. Click here to see a trailer for "2".

Further details will be announced soon for "A Night of Maine Film and Music" including surprise guests, giveaways and much more. Stay tuned to www.emptyhousefilm.com, WBLM and WCYY for chances to win prize packs.