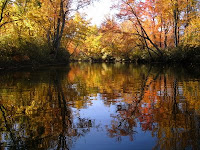 Imagine my surprise and amusement to read this sentence on the WCSH TV-6 website: "The Fryeburg police chief is promising to bolster patrols along the Saco River, which is known for rowdy behavior of some canoeists." Rowdy CANOEISTS? Somehow this doesn't seem compatible with my mental image of lazy paddling on sunny waters. 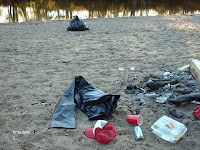 The article mentioned above was posted earlier today, but this has been going on for a long time. Remember, legend tells us that it was rowdy guys in the summer of 1675 that caused the Curse of the Saco River to be passed down over the next three centuries and more. Might it not be good to pay attention to the warning signs, fellows?

The images here show the sharp contrast between the natural beauty of the Saco River and the use which partiers put it to. Please note the goat being held up by the riders of the typical example of a Saco River party barge. I really don't want to know what they were doing with the poor thing (click on photos to see larger version). Photos are from the Saco River Recreational Council. 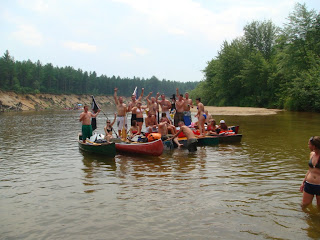 Things are coming to a head, between the addition of the new patrols and the announcement a week ago of a lawsuit being levied. The Lewiston Sun Journal reported on April 24th that "a 28-year-old New Hampshire man has sued two Massachusetts men and a Fryeburg campground after he was seriously injured by a water balloon in 2007." Again, this sounds laughable. But the details tell another story. Try imagining this: "In the incident on Aug. 12, 2007, Nelson was struck in the eye by a balloon that had been fired from 67 feet away. He suffered a broken ocular bone and lacerations to the face and was later flown to the Massachusetts Eye and Ear Infirmary in Boston." [Source]

The Saco River Recreational Council (source of all the photos shown here) has been fighting for years to make the river usable for all those who want to enjoy it, and are the ones funding the new patrols. For those of you curious about the history of this controversial river use struggle, here are a few more past selections to set the waters of thought and discussion flowing.

Back in 1989, the New York Times reported on what happened when the state tried its hand at quelling the trouble: "The State Supreme Court ruled unanimously today that armed state officials who were trying to stop illegal and rowdy conduct on the popular Saco River in southern Maine had no right to set up a ''riverblock'' last year to stop and search canoeists there. [...] Agents from the State Department of Public Safety and the State Department of Inland Fisheries and Wildlife set up the riverblocks on three weekends in 1988. [Source: New York Times, "High Court in Maine Outlaws Riverblocks," Wednesday Nov. 29, 1989]

In 2001 trouble continued to plague the area, resulting in more complaints, and taking an especially tragic turn with a drowning death. The Portsmouth Herald detailed the troubling events in an August 1, 2001, recap of the season:

Them crazy canoeists
By Associated Press

FRYEBURG, Maine -- It is an annual problem on the Saco River rowdy, intoxicated canoeists vandalize campgrounds, argue with locals, and leave piles of litter behind.

This year's spate of alcohol-related incidents, including the drowning death of a Massachusetts man, have some residents renewing the cry for a crackdown on such behavior.
[...]
In July, police were called after swearing, drunken canoeists climbed ashore to a boys' summer camp in Fryeburg, then physically threatened the counselors who asked them to leave.

Only days later, members of another intoxicated group were angry about fees charged for a campground threw picnic tables into a bonfire and shoved a park employee.

Last week, Edward Landry, 35, of Somerville, Mass., was found drowned in the river by several kayakers. He had been camping with about 14 people on the river and had been heavily drinking, said Mark Latti of the Maine Warden Service.
[...]
The Saco River became a hot tourist spot for paddlers about 15 years ago, and a handful of alcohol-related incidents occur every summer.

But authorities say rowdy drinkers are a tiny fraction of the paddlers, who primarily come from other parts of Maine, New Hampshire, Vermont and Massachusetts.
[...]
Read the full article here:[Source]

Five years later, the author of the View from New Hampshire blog had the following to say after a river trip in 2006:

There was a constant flow of canoes down the river, and most of the beaches were densely packed with tents and people. Some of the people were quite rowdy and unpleasant. It seems like the river is more heavily used each year. We still had a great time, and probably going earlier or later in the year would avoid a lot of the crowds. [Source]

I would say things haven't gotten much better. We'll see what happens this summer. 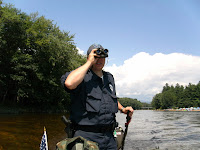 Posted by Michelle Souliere at 9:22 PM

It's too bad that grown men and women who are supposed to be adults act like 10 year olds.