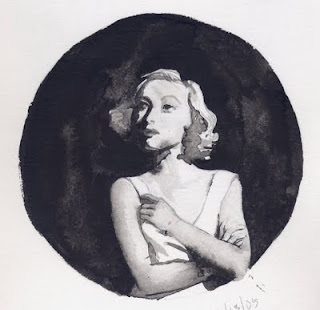 Off all of Maine's urban legends and folklore, some of the most elusive and evocative tales are those of the ghost brides. The variety of these tales involving hitchhiking ghosts are particularly hard to track for researchers like myself who want to find the fact at the root of the story. There is a lot of rumor and hearsay associated with them, but rarely does the original witness get to give their own account and have it recorded. Thanks to Mark LaFlamme over at the Lewiston Sun Journal, we now have a gem of a recent story, intact, directly from the original witness. He too has been chasing these stories for years. Read on!

Spectral lady hitches ride, vanishes By Mark LaFlamme Published: Aug 06, 2009 12:00 am It happened like this: Shortly after midnight on July 11, a police officer in Mechanic Falls stopped to check on a teenage driver who was frantically flashing his headlights. When the cop approached the car, he found a 16-year-old named David who was badly shaken. The kid was in tears and babbling about something that happened moments ago in Poland. The story David told was a crazy one but not unique. For generations, travelers through this dark place have told tales of a young lady dressed in white hitchhiking along Route 26. Sometimes she's dressed in a prom dress and sits quietly in the passenger seat. Other times, she is a bride dressed in white or a morose young woman with a cautionary message to deliver. But our friend David had never heard those stories. He sat in his car stammering and trying to explain to the frowning policeman what had happened. Just before 2 a.m., David was driving on Route 26 bound for Oxford. In the midst of all the darkness that collects in the middle of the night in Poland, suddenly there was a gleam of light at the roadside. "She was standing on the side of the road, near the frozen custard place. At first, it was just a white glow," David said. "I drove up closer and saw that it was a woman. She looked to be between 20 and 24. I pulled over and she said, 'Can you bring me to the church on Route 11?'" [...] "She asked me if I could start driving faster, because she was late for her wedding," David said. Those of us who have been around a while know that when a woman found wandering the back roads starts babbling about going to meet her beloved, what you have on your hands is a ghost. We will take appropriate action, which may include flinging ourselves out the window. But David steeled up and drove on with the curious woman in the wedding gown. He turned onto Route 11, where even greater darkness gathers, and within a quarter of a mile, he found what appeared to be a church. He stopped between two posts out front and asked his eager rider if this was the right place. [...] "She said 'goodbye,'" David said. "When I turned to look at her, she was gone." I'll give you a moment to rub the chill from your skin. David is absolutely sure the passenger door of his Camaro was never opened. When he peered out into the night around him, he saw no sign of the woman in white. No brightly glowing gown in all of the blackness along Route 11. [...] The ghost hitchhiker of Route 26 comes with a variety of stories. In the most common, the woman wandering the dark roads is the murdered bride of George Knight, slashed to death in 1856 in her farmhouse on Route 11. The woman will deliver a warning, or perhaps a prediction, to the person who picks her up. Then she vanishes. In another version, the roaming woman is the ghost of a young girl killed on her way to the prom. She is said to wander near the Poland Spring Inn, waiting for a ride in her eternal quest to make it to the dance. Like the slain Mrs. Knight, the ghost of the prom girl is said to vanish before the ride is over. "I don't think it was either of them," David says of his spectral passenger. His research — there is plenty to be found on the Web regarding the ghost of Route 26 — has led him to believe that the lady who sat in his Camaro was a bride struck and killed by a car on the way to her wedding in the 1930s; a woman forever trying to reach the site of that long-ago blessed event and disappearing once she arrives. David was also told that the man who was to marry the young lady is still alive, an elderly man who lives in Oxford. The terrain of local legend is a labyrinth of falsehoods, misinformation and tiny kernels of truth that get built upon and built upon like papier-mache over decades of retelling. David relates his tale with excitement but without the kind of rhetorical battering you find in those who are trying to convince you of a lie. I sought him out for this story; he didn't come to me. He spoke to me only hesitantly once I explained what I was after. And at last, there is a police report on the matter. The prettily dressed lady may not have identified her killer, or made her way to the altar or the prom. But at the very least, she climbed her way up out of local lore and into the public record. It took a brave kid in a Camaro to get her there. Mark LaFlamme is a Sun Journal staff writer. You can tell him about your sighting of the ghost of Route 26 at mlaflamme@sunjournal.com.

I never saw anyone on the side of a road but I did hear and experience some pretty interesting things at USM's Glickman Library especially on the 5th and 6th floors. That is one spooky place. People say Robie Hall (on the Gorham Campus) is haunted but I think that the library gives Robie a run for its money!

My father picked the young prom girl up nearly 20 years ago or more to give her a ride. He picked her up just past the Poland Springs Inn heading toward South Paris. She told him she would tell him where to let her out. He said that she told him to stop about a quarter mile before a small store named Bessy's. She opened the door got out and when my dad looked back as he was pulling away from the side of the road she had vanished. My father is 63 now and I was a child at the time. He happened to tell me this story because we were discussing ghost experiences on Halloween '09 now 2 days ago. I guess Halloween just brought it out, and I told him I'd search to see if I could find a story on her and it seems his story closely matches the prom girl. So I've written this to share his story to others. I hope some of you enjoy it.

I have a place in Otisfield off Rt 121 just over the Casco line. A couple years ago my sister inlaw and her friend came rushing in, just back from the Casco AG. It was pooring buckets, all excited they told of a young woman walking in the rain, in what looked like a wedding dress. As they got closer to ask if she wanted a ride, she diappeared in front of thier eyes. Totally freaked them out. This was just after camp Arcadia heading north. Imagine our suprise when we read of the young mans story, puts the hairs up on back of my neck!