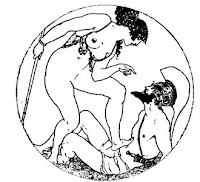 Well, it's going to be an interesting weekend on Congress Street, according to an announcement that appeared in the latest issue of the West End News...

The event is scheduled from 1:00pm - 3:00pm, and is meant to point out the inequality in the social acceptance of male toplessness as compared to female toplessness. Full topless nudity is strongly encouraged, but for the more modest, pretty electrical tape will be in supply.

Personally, I can think of a number of more pressing issues that could use this kind of attention and effort, but maybe they just want to lighten things up a bit (not many things out there are lighter than skin after a Maine winter!!!). Or perhaps someone just wants an opportunity to see lots of happy skin out in the open? Who knows...

Illustration is from an edition of Lysistrata translated from the Greek of Aristophanes with illustrations by Norman Lindsay.
Posted by Michelle Souliere at 11:06 AM

Question for anyone who knows: is "Pretty electrical tape" acceptable in any other settings? It seems to me "pasties" should be encouraged...

Could be worse. Could be happening in Lewiston.

I'm one half of the organizing team. There wasn't really an effort involved in this. All I did was make an event page on Facebook. I never expected it to get this big.

Hi Ty! Well, it doesn't take much to get people wound up during cabin fever season. *grin*

At least it sounds like you'll have warm weather!!