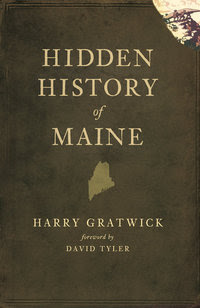 Harry Gratwick is a lifelong summer resident of Vinalhaven Island in Penobscot Bay. He is an active member of the Vinalhaven Historical Society and has written extensively on maritime history for two Island Institute publications, the Working Waterfront and the Island Journal. Harry and his wife, Tita, spend the winter months in Philadelphia. Hidden History of Maine is his second book.
Posted by Michelle Souliere at 3:43 PM