BREAKING NEWS: Self immolation in Portland

So far as I know, not since 2007's self-immolation in Kittery has someone in the state intentionally set themselves on fire. This time it has taken place in Portland, at Longfellow Square. According to an eyewitness, the man had a miserable look on his face, set down his backpack, and the next thing he knew, the man was a pillar of flame. He ran screaming out into the intersection of State Street and Congress Street and collapsed. Emergency crews rushed to the scene as smoke filled the street -- everything seemed to happen faster than most people could react to what was going on. No word yet on who the unhappy man was. 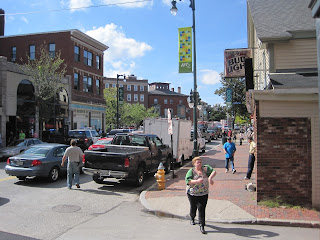 Emergency vehicles and traffic swarm around the scene just before 12:30pm.

UPDATE:
The Press Herald has released more info, though the man's name is still being kept private until family has been contacted. The man was apparently a resident of 675 Congress Street, where he doused himself with gasoline in his apartment before going out to the square and setting himself on fire. He is 24 years old.

Loren Coleman interviewed some witnesses, and has dug up some odd historical coincidences attached to the date and location at his blog:
http://copycateffect.blogspot.com/2010/09/immolationme.html
Posted by Michelle Souliere at 12:36 PM

Email ThisBlogThis!Share to TwitterShare to FacebookShare to Pinterest
Labels: longfellow square, maine, portland, set self on fire, suicide by fire

Jon-- You're right, I forgot about the UMaine student in 2008. Some days you read that kind of headline and want to block the news out...