Maine Wildlife in the Snow

It might not be "strange," but it is rather magical to be able to see the tracks of animals in the Maine winter snow. Back in February I had a chance to go out tromping with a friend, and it being the day after a snowstorm made for a bumper crop of tracks.


Here are just a few: 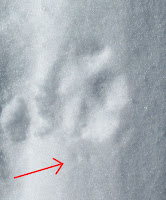 Above is a coyote track (there were a lot of these), in which you can see the telltale two-claw dots at the front of the foot (look at the red arrow directing you to the 6:00 point of the photo).

To the right, you can see the full trackway, where the coyote carefully pads along the raised, packed runner left by snowmobilers in the fresh snow, very daintily stepping within the same spots as it moves along. You can see our bootprints along the edge of the coyote's runway to get an idea of scale.

The last track set for this post (I'll come back with more later) was a real puzzler at first. You can see them below. The lateral footpads set behind long toeprints, with prominent claws showing on many of the tracks, indicated a number of species possibilities, but the size, only a few inches long, could only match one thing, if I am not mistaken -- a skunk! So I'm glad we only saw his tracks and not himself.

Posted by Michelle Souliere at 8:46 PM