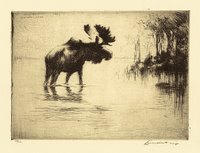 In Curtis D. MacDougall's 1940 book, Hoaxes, one of the early chapters is called "Why We Don't Disbelieve." In that chapter, brief mention is made, under the heading of "recent additions to unnatural history, all of which received space on press association wires", of "a 'specter moose' reported to have appeared again in the woods of Maine after having previously been seen in 1901, 1917, and 1932."

Well, there's another item to add to my list of research treasure hunts in the old newspaper files...

Illustration: Bull Moose etching by Levon West, 1927.
Posted by Michelle Souliere at 8:21 AM

By chance, I've also been looking for info about the Maine Specter Moose, and so I found your weblog.

I'm putting together a list of tall-tale creatures. You can see what I've got so far here:
http://www.museumofhoaxes.com/hoax/animals/

MacDougall's offhand remark about the specter moose is frustratingly vague. He doesn't indicate any source! I've checked a bunch of archives, but haven't been able to turn up anything.

If you find out anything about the mysterious Specter Moose, definitely let me know!