Zombie Kickball Returns from the Dead! 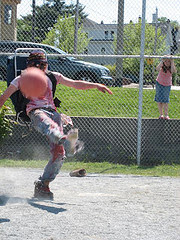 Yeah, you thought it might never happen again. You glared into your mirror, pulling your hair out and grimacing, thinking to yourself, "God, how could I have missed it?! What is WRONG with me?!!" And then the unimaginable happens. The once in a lifetime event RETURNS. You, my dear friend and lover of all things zombie, are given a SECOND CHANCE.

Eastern Prom Kickball Field.
Portland, Maine
Be in costume or be consumed!

OK, imagine it . . . Memorial Day Weekend on the Eastern Prom, sailboats criss-crossing Casco Bay . . . young lovers, lazing on the grass . . . the smell of backyard BBQ's . . . the sound of children frolicking on the playground . . . and several dozen shambling, undead converging on the Prom for a knockdown, drag-out game of Zombie Kickball!
What better way to celebrate the unofficial beginning of summer?

If you don't feel like playing k-ball, you can still help fill the Zombie Bleachers. Last year we had about 30 folks show up, this year we're shootin' for 100. Sky's the limit, Zombie Cheerleaders, Zombie Drum Line, Zombie Hot Dog Vendor . . . bring it!
Now, forward this to anyone you know who might participate, the more zombies, the better ZKII will be.

If you missed it last year's fun, you can see some of it online: Zombie Kickball 2006 on YouTube, or take a peek at Jeff Boulet's photos on Flickr.

Lurch your way on out, it's bound to be fun.

Photo by Jeff Boulet.
Posted by Michelle Souliere at 9:44 PM