The City Has Ghost Streets : Part 1 - The West End

With this new and occasional series, Strange Maine visits what can no longer be seen in the city of Portland: streets and sites whose references are merely their ground coordinates. Replaced, plowed-over, or built-over, these are the city's Ghost Streets whose silent witness is in the ground of the Forest City's very roots. Their documentary memory is fragmented, yet evidenced, in ancient maps and archival documents, but beneath the surface their stories are sensed in the spirit subsumed... 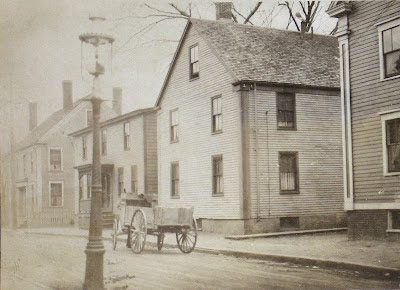 What we now see is surely not
all that has been,
and whither one may travel in the state of Maine country, city, farm, and shore, the present day is built upon substrata that call to those who need only scratch the surface.

Portlanders who call the West End home may hastily pass by the sprawling Reiche Elementary School, which- for folks who are unfamiliar with the city is the neighborhood at the western rim of the peninsula city- seems an anomaly in a densely-packed district of 18th and 19th century houses and triple-decker apartment buildings.

On a second glance, the school's 1970's architectural contrast with the houses standing around it may be cause for curiosity, as well as the suspiciously levelled expanse in the heart of an ancient residential quarter, once known as the Bramhall Hill area.

The pictures above and below attest to over 40 homes which had been entirely demolished in the early 1970s; these are from the ghost lane called Bradford Street. The street and all its homes, in addition to Varnum Street, are completely gone. (Above is a view of 9 Bradford Street; below, the home at Number 11.) The photos were taken in 1924, and the one below shows a gaslight street lamp. (Photos may be enlarged by clicking on these smaller versions.) 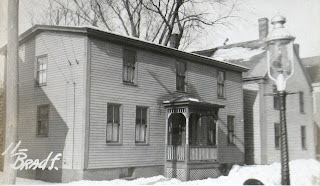 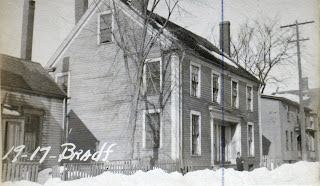 Above is a duplex that was on the Numbers 17 & 19 Bradford Street lot. Today this is topped by the school yard, and behind this building is today's Aurora Provisions, on Pine Street. The child pictured, playing in the street, may have gone to the Brackett School- which is todays' Fresh Approach Market, at 155 Brackett Street.

Below is a livery-stable, likely converted into a garage with the advance of the 20th century, on the even-number side of the no-longer-existing street. Perhaps the cafeteria stands above this. 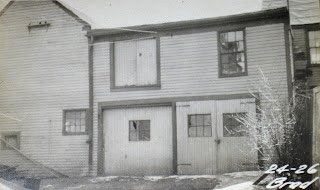 And here (below) is today's surface- the humble "Bradford Walk" sign attached to the Reiche School building. Note the architectural style of what continues to stand sentry on Clark Street, and how identical it is to what was- on Bradford and Varnum Streets. 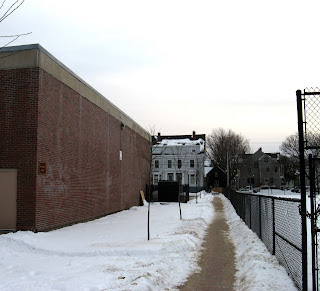 Now a map, showing the area in 1914- from the Richards Atlas of Portland streets. The peripheral Pine, Brackett, Spring, and Clark Streets encompass the Reiche School area, and excluding the row of buildings along Pine (at left), everything else you see within that periphery- including the streets themselves- were demolished and leveled in 1972. In the Richards Atlas, yellow indicated a wooden structure, and red meant brick. Now we move a ghostly block- now existing only in spirit- to the southwest, and find Varnum Street. Immediately below is the Varnum Garage. Note the 1920s vintage gasoline pump- and the unique roof- which can be recognized in the Portland Evening Express picture further below, taken for the March 14, 1972 article, describing- not the structure or the displacement of some sixty households, but the magnet school to be built over the large site. 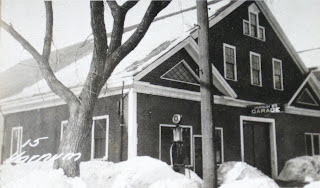 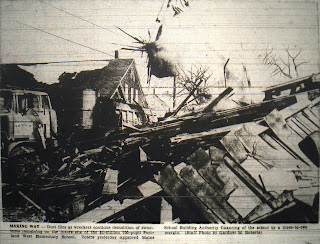 Like the once bustling Bradford Street, Varnum Street is understatedly memorialized by barely detectable plaque (right, in the photo) upon the Reiche School. In the background is the old Brackett School, which is now Fresh Approach- or for West Enders with memories extending before the 1990s, the late and beloved Good Day Market Co-op. 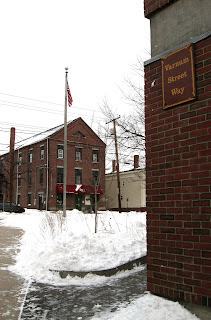 Below- two more from Varnum Street: Number 16 and Number 14. These were close to Clark Street, and we can see how these are also architecturally harmonious with prevailing Victorian styles typical in the West End. Look closely at the one immediately below, with a for-rent ("To Let") sign in the front window (and snow piled into the side entrance). The house at lot Number 14 has a Mansard "Second Empire" style roof. When you visit the Reiche Branch of the Portland Public Library, your steps have been warmed by those of the woman pictured in this scene- and an innumerable number of pedestrians- and vehicular traffic. 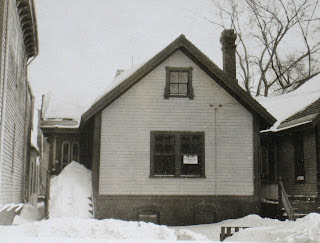 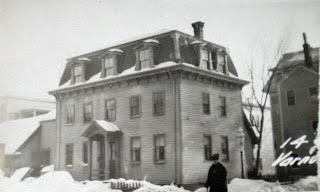 And once more, below, a view taken today- this time the side of the Reiche School which faces Spring Street (named after an ancient fresh-water spring in the neighborhood). Notice, in the far background, the mouth of the still-existing Spruce Street. Now scroll up to the map and see how Spruce Street once extended all the way up to Brackett Street. That block of Spruce Street is indeed a ghost street- all its homes leveled and paved-over. On a map made in the 1850s, Bradford Street was called Peach Street; now we can imagine a web of streets near one another called Pine, Peach, and Spruce. Perhaps the trees themselves, with the Dutch Elms, have ghosts too. 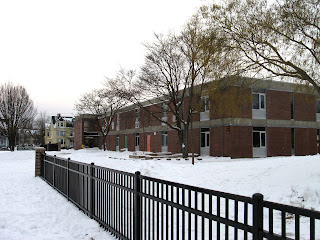 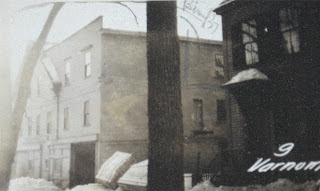 And finally, a murky 1924 image of Varnum Street. When you are strolling Cushman Street, and notice how it is abruptly cut off by the hard curb bordering the school yard, you'll have found where Varnum began. What were in those containers, in the picture? Whose lives were situated in these apartments? How do parts of our selves and our souls begin- and remain- to inhabit our living spaces? Might place be transcendant of structure? The City indeed has Ghost Streets that speak from beneath and beyond.

This is great, vital stuff -- thanks for your efforts. Are your photos from the assessor's office or do you have a secret stash?

I'd love some insight into Spring Street between High and Temple pre-urban renewal. No photographic record is readily available of that area, and I've been curious for years. I survived a similar apocolypse in Portmouth in my youth in the 1970's, which is why your work here resonates so strongly with me. Thanks again.

Hi festoonic! The vintage photos are from the Portland Room archives, which include assessor office photos of bygone days.

Thanks for this, Michelle. You're awesome!

You're welcome Alex! You should thank Abraham, who wrote it -- he's doing all the legwork!! :)

Michelle - I'm working on the 1924 project, scanning these pictures for the city... I just came upon Bradford Street in book 7! You must have been here, too! -Holly

Hello Gordon -- I would suggest you go straight to the source, and contact Abraham Schechter in the Portland Room at the Portland Public Library. :)

Thank you for this - it brought me down memory lane. In the late 1970's, I was a VISTA for Portland West Neighborhood Planning Council, based in the People's Building. One project I enjoyed was setting up an art show in Reiche. I dug through tax photos of the streets and houses displaced by Reiche. I mounted the pictures on easels and they were lined up so viewers could "walk the streets in front of the houses"
I used some of these very photos.

Dorothy did you have any pictures of 6-8 Spruce Street? Thanks Bob White