Not Your Normal Fort

With copies of the late spring Gazette issue hot off the press, I made my way north to historic Fort Knox and the fair town of Bucksport, Maine. I had been hearing about the Paranormal and Psychic Faire for the last couple of years, and while I was interested, I had yet to get up the steam to transport me hither. That was until Leon Seymour, of Friends of Fort Knox, dropped an e-mail in my inbox inviting me to climb on board.

After repeated, unsuccessful rearrangements of my transportation and lodging plans, my friend Sue finally came through in a pinch and drove me up through the spooky fog of an early July 4th morning to the land of Prospect, on the shores of the Penobscot River. The misty atmosphere created an eerie, awesome feel to the scene as we drove past the unmistakable Penobscot Narrows Bridge and the so-called Bigfoot footprint in the cliff which overlooks it (this interesting formation was exposed during blasting for the new roadway). 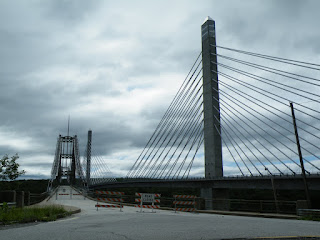 PHOTO : The Penobscot Narrows Bridge dwarfs its predecessor, the Waldo-Hancock bridge. Completed in 1931, it was the first long-span suspension bridge ever erected in Maine. It will remain in place until a thorough dismantling is possible.

On arriving, we made a quick tour to the top of the fort and then down one of its seemingly endless stone battery staircases, damp with condensation. Already the fort was beginning to work its spell on me.

Sadly, Sue had to head back to town, but it was time for me to get down to business anyways. I found myself set up with a table in the fort’s visitor center, where I joined a terrific assortment of other Maine folks who, like me, are all blessed with an innate curiosity and need-to-know about things on the fringe. Next to me were ufologists Cindy Proulx and Chris Gardner, and further up the row was friend and fellow Portlander, Loren Coleman, as well as another friend, Maine supernatural history author, Emeric Spooner. Facing us were the fine folks of the Bangor Ghost Hunters Association, and Gordon Barton, former President of the American Dowsing Society.

My biggest problem became the agonizing choice between whether to staff my table or to take this rare opportunity to hear some of these folks speak. I wound up divvying up my time between the Strange Maine Gazette table and the guest speaker presentations, and managed to watch each of the presenters once over the course of the weekend. 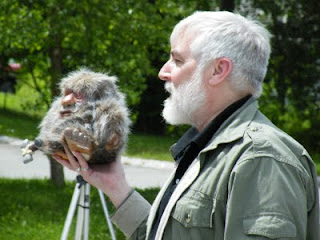 PHOTO : Loren Coleman displays the latest addition to his museum collection of cryptozoological items -- a pop culture representation of a Bigfoot-type creature given away in a furniture store promotion in the South during the 1990s.

It rained off and on all day Saturday, driving Loren Coleman’s audience in and out of the visitor center from minute to minute. But in spite of the iffy weather, a steady stream of folks arrived, either to drink in the fort’s history, or to or to feed their need to find out about the future and other uncertain things. While select speakers entertained the small crowd at the visitor center, down in the dark quarters of the fort, psychics sat for readings with a steady line of those who came in search of comfort, answers, or a sense of mystery to add to their lives.

Expecting a cold but interesting evening spent trying to sleep on the concrete floor of the visitor center in my sleeping bag, I was surprised and pleased to find myself put up for the evening very comfortably in the home of Carol (Bittersweet Gifts, Bucksport) and Don Metthe (Friends of the Fort, Bucksport Director). Thanks to these two kind folks, I spent a very pleasant evening, and Carol treated me to a short tour of the town the next morning, before getting back to business.

Sunday, July 5th, dawned bright and sunny, and the day was great from start to finish. Starting out with my first visit ever to the site of Colonel Buck’s tomb, replete with the alleged stain of the witch’s boot on its face, and ending with a lively drive back down U.S. Route 1 to the outdoor flea markets of Searsport with Loren Coleman before heading inland, it couldn’t have gone better.

In between talking to folks from all over (hi Nomar!) at my table, and signing some new folks up for subscriptions (thanks everyone!), I managed to steal a break so I could wander around the fort a little more. 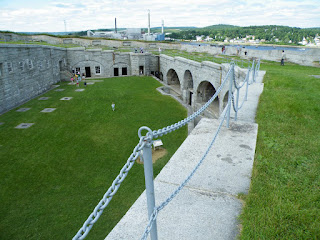 Imagine my surprise when I realized how huge it really was, and how many hundreds of feet of tunnels and stairways wind through the levels of its pentagonal shape. All I can say is, “WOW!” The scale of Fort Knox is phenomenal, especially when compared with some of Maine’s other historic fort site, such as Fort Edgecomb.

Building started on the fort in 1844, and the last troops left its grounds in 1898, leaving the fort under the watchful eye of the official “Keeper of the Fort.” Today, the Friends of Fort Knox have collectively taken on this role, as well as the restoration of the fort and the important task of making the fort and its history available to the public. 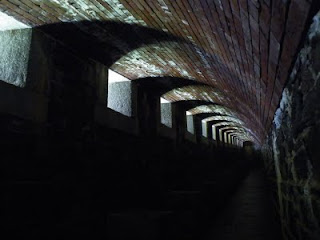 PHOTO : Fort Knox is made up in a large part by spectacular, endless tunnels, crafted from brick and granite, and constructed in a surprisingly graceful series of arched and angled pathways.

More visitor information about the fort is available online at:
http://fortknox.maineguide.com

You know what's awesome? When the Society for Creative Anachronism (SCA) takes over the fort for their annual demonstration. They have a model trebuchet (siege engine) that hurls pumpkins off the ramparts, and a band that plays period music that echoes off the stones.