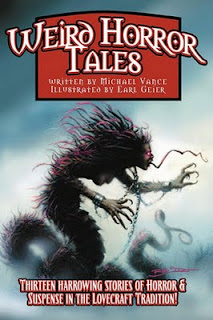 Weird Horror Tales, despite its generalized title, collects 13 tales very specifically centered around the fictitious town of “Light’s End” in Maine. While varying in their historic timeframe and even at times in their style, they are all crafted in the weird tales tradition. A great find for fans of this field of fiction!

Unlike many writers who claim to be inspired by Lovecraft, Vance is not afraid to produce stories using an efficient and sparse storytelling technique, which suffers nothing from omission, and lends itself to the very Lovecraftian theme of cosmic horror that rears its indescribable head throughout. The reader is more likely to encounter a poetry-like flow of Bradburyesque proportion than the purple prose of Lovecraft’s fantasy pieces, especially in such stories as “Wishful Thinking.”

His characters are normal, desperate, deranged, owners of strange agendas, people who want basic and harmless lives, and people who want to cause harm to enrich their lives. The settings are reflective of the strange arrangement of the townspeople’s history and continued existence. They live in the shadow of “the Great Secret Hidden Openly.” The length and breadth of the human betrayal taking place in Light’s End is brought into sharp focus when the reader is reminded of the simple, honest need for a good life, even as communicated via the otherworldly narrative in the award-nominated* story “The Lighter Side.”

Humor, the likes of which fans of Tales from the Crypt will appreciate, creeps in from time to time. There is something rottenly appealing in the idea of the faux lighthouse restaurant in “Knock-Off,” with ever-popular tourist-attracting features such as the “irritating moaning of ‘the alien dead, giddy with hunger’, that incessantly gibbered from hidden speakers in the floor,” décor inscribed with “symbols and mermaids with needle teeth,” and “wallpaper that illogically seemed to creep across the wall.”

The wonderful thing about independent publication, and the use of short stories, is the freedom that both give an author to pursue a variety of storytelling techniques, while the collected format allows a common ground for tales to form from. In more ways than one, this collection reminds me of Bradbury. Vance seems to feel a similar need to tie together the ingredients of tragedy and transcendence, and a brave daring to try new storytelling techniques and voices pulled from the fringe of the genre. I can only imagine what will happen if he finds a really keen editor with the ability to help him shape this series into the crescendo it could become (this is the first of 3 planned volumes).

"Weird Horror Tales” really winds up working as the title for this collection, and Vance’s years of writing experience show in his Jack-of-all-trades approach to fantastic fiction. Take a solid, squirming bedrock of horror, throw in some satellites of sci-fi, a generous helping of Twilight Zone plot twists, lace it with the eldritch horror of H. P. Lovecraft’s favorite poisons, and you have yourself a hefty volume of entertaining and engaging stories which will surprise you with its variety, and reward you with each re-reading.

While I may not be completely sold on Maine as the setting for this series, I understand the effort given to make these stories come alive in a Maine that Vance has never seen, and I more than understand his love for the weird tale, and the honor given Maine by choosing it as the place for these stories, outside of their Midwestern author’s experience of his home state of Oklahoma. Maine is an “other” place. These stories certainly are alive in their other place, a place with a unique kind of strangeness that I think Lovecraft would have been well pleased to see spawned from his legacy.

I would really like Michael Vance to visit Maine as he completes work on the next collection in the planned trilogy of Light’s End anthologies. But then again – maybe if he came here he’d be too charmed to write more Maine-based horror! Perhaps we should simply invite him to come during February to prevent such a tragedy.

In preface to this section, let me just say that I realize how difficult it is for an author to research a location he is unfamiliar with. Vance says he does “a lot of research to get my setting right.” This is obvious in his use of a wide range of specific details used in his world building, both in his attempts to reference Maine, and in his use of the Oklahoma town he grew up in to form the structural matrix of the concocted Maine town of Light’s End.

Perhaps in his copious note-taking, certain cultural elements have been misattributed to Maine when they really belong to other New England locales. Perhaps all of New England seems like a single collection of places to folks from the Midwest. At any rate, there are too many small moments when questions arise, speaking as a Maine reader, when Vance includes specific place-related details in the tales. Plus the feel is just a bit off.

It was always the little things that cocked my eyebrow, like a Providence, RI, reporter and radio commentator showing up to interview a Maine senator during a fishing trip in his hometown locale, away from his usual Washington, D.C., setting, instead of the much-more-likely Boston press, or the fact that Vance set the stories in Maine to honor Lovecraft, who, (although a professed fan of the state), had little to do with Maine beyond a few sightseeing trips and the use of its wily and weird backwoods as way-stations in a couple of his stories. Lovecraft is much more thoroughly identified with Rhode Island, where his final resting place is marked with a stone that bears the legend, “I am Providence.” Heck, I wish Lovecraft was Maine’s. At any rate, Light’s End is Maine’s now!

* “The Lighter Side” was nominated for the Speculative Literature Foundation’s Fountain Award for Best Short Story in 2004.

Weird Horror Tales is now available at Barnes and Noble, amazon.com, and any bookstore with interesting weird fiction book selections.
Posted by Michelle Souliere at 3:40 PM

Thank you for your wonderful review, Michelle.

You made my heart sing.