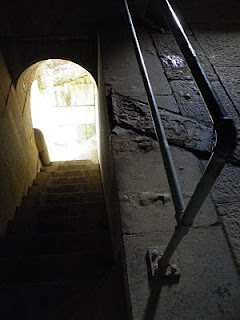 Exciting news from our friends at Fort Knox! Read on...

The Friends of Fort Knox received an interesting email recently from the producer of the SyFy Channel's hit series, Ghost Hunters. According to the email, the producer was searching the Internet and came upon reports of paranormal activity occurring at the State Historic Site.

Over the past several years, local paranormal investigating groups have approached
the Friends of Fort Knox to enlist their help facilitating night time research. Some of these paranormal research groups such as Bangor Ghost Hunters, Central Maine Paranormal and Maine Supernatural, have posted their investigation result on the Internet. Recently, a new paranormal investigation group, the Bangor Ghost Trackers, were featured on a local TV news program describing their belief that Fort Knox is indeed haunted.

The Friends notified the Maine Department of Conservation’s Bureau of Parks and Lands (BPL) about being contacted by the Ghost Hunter TV program. The Bureau of Parks and Lands manages Fort Knox on behalf of the people of Maine and is being asked to approve the shoot. The Friends informed BPL that they would be willing to head up this project by providing staff supervision, facilitate a meeting between the TV show producers and individuals who have reported “experiences” at the Fort and assist the film crew with logistics.

Friends of Fort Knox executive director, Leon Seymour said that "The Friends are very excited about the possibility of the Ghost Hunters traveling to Maine to investigate and film at Fort Knox. The Friends believe that featuring Fort Knox on a TV show watched by millions will swell Fort Knox and Penobscot Narrows Observatory attendance and have a positive impact for local businesses from increased tourism."

Though the Friends of Fort Knox have never taken a position on whether the Fort is haunted, they say that they are often asked by visitors if the historic site is indeed occupied by spirits. The Friends of Fort Knox are a nonprofit organization dedicated to restoring Fort Knox and enhancing its educational, cultural and economic value for the people of Maine. The Friends' latest restoration effort is focused on extensive masonry repair throughout the Fort.

Individuals who wish to be considered for an interview relating what they believe to have been a "paranormal experience at the Fort, may contact the Friends at FOFK1@aol.com or by telephone at 207-469-6553.


Let's hope the folks at the Bureau see fit to approve the adventure! I for one would love to see an investigation of the Fort. It's such a fantastic location to begin with, and the stories coming out of the Fort have been so interesting.

One of the most recent took place during work on Fright at the Fort 2008. The Bangor Daily News reports:

He was surrounded by trees with faces, flying monkeys, a wicked witch and, yes, spooks.

Now, Teddy Cooke, 19, of Verona Island has a good reason to say the same thing.

Cooke, who works as a tower and gate attendant at Fort Knox Historic Site and the Penobscot Narrows Observation Tower, didn’t have to deal with the Wicked Witch of the West, but he did have a close encounter of some kind last Saturday night inside the fort.

It happened Saturday night as Cooke was closing up the fort after the annual Fright at the Fort event. He wasn’t one of the ghouls, trolls or ogres stationed in the fort to spook the nighttime visitors. Cooke was part of the tech crew, in charge of the fog, the lights and the scary audio for the event.

The fort was dark except for the “Fright” effects.

“My job was to lock up, shut down all the electrical stuff, the fog machine and the strobe lights,” he said. “I was going to the upper level of the officers’ quarters when I saw it — it was the back of a leg moving at the end of the hall.”

At that point, he said, he thought there was a straggler from the Fright event, and he called out to say the fort was closed and to follow him out. There was no response.

From the hall, a set of stairs leads up to a long corridor known as “Two Step Alley.” Cooke walked up the steps and as his eyes reached the level of the floor, he saw the dark shape of someone walking down the alley.

“About halfway down, I could see the figure of a person,” he said. “There was a red floodlight at the other end and it clearly blocked out the light.”

He called out again, but there was no reaction.

Cooke said the figure looked like a “solid shadow.” He saw no face or details, but could tell it was walking, not gliding. It did not react or turn when he called. And it made no sound that he heard.

Although he said he felt a little jittery, he didn’t feel any emotion or any presence from the figure.

He reached for his flashlight and the figure was gone.

“I looked down for just a second and when I looked up again, there was nothing there all the way to the end of the alley,” he said. “At this point, I’m still thinking it’s a person. There are pillars all the way down the alley, and I thought they may have ducked behind there. I thought maybe someone was going to jump out and scare me.”

Cautiously, he checked each pillar all the way down.

No one was there.

“There’s no way anyone could have gotten down the alley in that time,” he said. “Up until I got out I thought it was a person. I don’t know what it was. I got out of the fort as quickly as I could.”

Cooke admits to being a fan of the “Ghost Hunter” television show, but said he wanted proof before he’d believe in ghosts. He says he has it now.

“I considered myself a skeptic until something happened so that I would know,” he said. “This was kind of that ‘it’ that happened.”

Some might discount Cooke’s account as imagination, but he’s not the first to have a supernatural experience in the fort. According to Leon Seymour, executive director of the Friends of Fort Knox, there have been reports for years from visitors and fort staff of unusual happenings.

“I’ve heard hundreds of stories,” he said. “People having their hat taken off, people being pushed.”

The fort is a likely spot for spirits, according to Sky Taylor, a Bangor radio announcer and co-founder of the Down East Paranormal Society.

The granite and the fort’s proximity to the water all help to store and conduct spirit energy, Taylor said.

Taylor and her husband have had unexplained encounters in the fort before, one of them in the same area where Cooke saw his spirit on Saturday. Several years ago, she brought in a psychic, who confirmed there were spirits dwelling in the fort.

Although no one actually died inside the fort, Taylor said, the spirits could be soldiers who had strong ties to the fort. One might be Sgt. Leopold Hegyi, who spent 13 years at Fort Knox and died in a house across the road from the fort where he lived.

Taylor produced a special radio broadcast about the spirits at the fort and included the story from a former guide at the fort during the 1980s. The guide reported that on one of her tours, a soldier showed up at the edge of the group. She assumed it was one of the Civil War re-enactors who hold encampments at the fort.

She learned later that none was at the fort that day.

“A little later, she saw a photo and said [the soldier] looked just like Sgt. Hegyi,” Taylor said. “If anyone had ties to this place, it was Sgt. Hegyi.

Although Hegyi’s widow, who lived in New York, collected his belongings after the sergeant died, she did not claim his remains. He is buried in a cemetery a short distance from the fort down Route 1 in Stockton Springs, Taylor said.

Cooke is not sure what he saw, but he’s convinced he saw something. He’s a little “uneasy” about going back in for this weekend’s version of Fright at the Fort, and admits that anytime he comes back into the fort, he’ll recall this incident.

Sweet. For Knox is one of those places I've thought of as haunted since I was a kid. Maybe I'll be vindicated through technology.

I don't mean to hate on this (I love Ghost Hunters and Fort Knox) but I did some research and there are no records of any deaths a fort knox. Only one of an elderly sentry who died a few doors down. I don't mean to be the bearer of bad news but I don't think it's haunted.

I have never been to Fort Knox. After hearing that Ghost Hunters might be coming to the fort I decided to look into the experiences that people have encountered there. Judging by these stories I believe that the fort could possibly be haunted. It would be great to have the experts (Ghost Hunters) come to Maine so we can finally know for sure if the Fort contains spirits or ghosts. I am a big fan of their show and I hope to visit the fort soon.

My boyfriend and I were there in July, and he want to
take a picture of me. When we came back home
and looked and the picture there clear as day
was a man looks like a solider standing right
behind me. It also looks like someones hands
are near my mouth when my hands were down
on the side. My daughter was also there and
she had tripped and fell. She said she felt like
someone was pushing her and pulling her I
Thought she was just tired. When I came home
and read that had happen to several other people
I could not believe it.