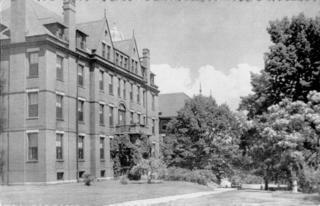 It is said that Robie-Andrews dormitory on the Gorham campus of the University of Southern Maine is haunted. The dorm is the oldest building on campus and in the 1800s was an girls school. I have heard two stories about deaths in the building. The first is that a girl committed suicide by hanging herself in the tower after she became pregnant and her boyfriend left her. The second story is that a young woman either jumped or was pushed to her death while a number of people were congregating outside the building.

Students report hearing strange noises in the attic and finding cold spots in the building. Some report seeing a woman standing in the tower, even though the tower is sealed off and there is no way to get up there.

The room next door to the attic is no longer used to house students due to the strange occurences that have taken place there. A student that works with me said that he had a friend who used to live in the room and when he visited her, the lights and tv would shut off by themselves.

On Halloween, the resident advisors take students up into the attic to tell ghost stories...and they are never heard from again. Well, actually they all come out of the attic unscathed, but it just sounded much scarier to say they were never seen again.
Posted by Chris Jart at 9:48 AM

wow, where did you hear about that? I heard from an old student that USM's portland hall is haunted. in one room at night my friend twould lay in meb and if he was alone would hear small "dings!"like some one dropping pennies or marbles on the floor.

Heard of it through friends, then had Chris do some current surveys with her work study students at USM in Gorham (she wrote the article).

Have some very good stories from my old roommate Aaron. I should post them. I'm hoping he'll do a thorough write-up on them and we can get a full post from him. As a tantalizing start:

"suz and i both have "psychic vampire attack!" stories...and the girl upstrairs from her used to move her furniture around at 2am and when you would go upstairs to yell at her, she would be asleep."

I found a direct mention of Robie-Andrews here at the Shadowlands site that states:
"Local documentation indicates that on the fourth floor of this building there was a suicide or murder in the early part of the 20th century when it was still an all-women's learning center. Students have seen the ghost on several occasions.

The fourth floor also exhibits inexplicable cold spots and mild poltergeist activity. Students constantly hear footsteps moving around above them in a vacant attic. A student who lives near the attic stairwell said she felt someone grabbing her arm and her room seems to always be cold.

According to legend there are 5 spirits in the building. One of which (the most active) was a female college student who lived in the 1800's. She committed suicide after her boyfriend left her when he found out she was pregnant."

I live on the 3rd floor at the bottom of the staircase that leads to the attic. And I had been experience strange things, mild, just odd. I tend to be a bit sensitive towards paranormal activity, and when I went up into the attic for the ghost stories (a couple days ago) I got this immense feeling of sorrow. It was like I could hear slow heavy footsteps (mind you this wasn't audible, it was more of a "Vision") walking right passed where I was and heading for the tower window, I looked up towards the cross beam that lies above the window, and I saw the silhouette of a woman swinging, as if hung by a rope.

Than today, I wanted to do some research on the dorm, and found that it is documented that a girl did in fact hang herself in the attic.

I live right under the attic in Andrews and I can say from personal experiance that there are often sounds of footsteps, and even sometimes of moving furtiture, despite the fact that the attic is locked up. Earlier in the semester the furniture moving sounds got really loud and violent, so much so that some of us found it hard to sleep.
One night when I was at my desk writing an e-mail I started to feel strangled, forcefully, as if by some invisible force. It scared me so much that I had to spend the night in one of my friends rooms.
I have also heard from my friends who live in the rooms next to my and across the hall stories of seeing glimpes of strange men in their room always pointing to one paticular spot, or having their shoes into put straight lines, or windows mysteriously opening in the night.
Another one of my friends told me that she thinks (I don't know where she hear if from, or if she somehow figured it out by herself)that the girl who hung herself wasn't pregnant, but was instead being sexually assaulted on a nightly basis by one of the male teachers or administators, and comitted suicide because she couldn't take it anymore.

I live on 4th Robie as I write this...and have never experienced anything unusual here. I do believe in ghosts and I have a few ghost stories of my own...just none of them involve Robie-Andrews

I lived on 3rd floor andrews in 1971-72 and there was a ghost cat that would wander throught the wall between my room and the next. My friend who lived in the next room saw it too. I have since spoken to students who lived there after me and they describe the same cat.

...I'm going to be living in Robie-Andrews this fall. Eek?! Hahaha.

Although I wouldn't mind the shoe straightening or the cat.

I attended USM from 1976-81 (It was UMPG for the first two years) and know the Robie-Andrews ghosts well. In fact, I did a few newspaper articles about encountering the ghosts (these ran in the school newspaper, The University Free Press). The stories became so popular that Robie-Andrews decided to hold a "haunted house" on Halloween night, charging 25 cents for a trip to the haunted attic! A dummy was hung in the bell tower, so there is indeed a way to get up there--or there was in 1979. They even shined a light on the dummy, which appeared to be a young woman in a nightgown! Participants would ride up in a freight elevator and be led through the darkened attic, which was populated by vampires, ghouls and monsters. It was very, very successful and was held in 80 and 81. Don't know what happened after that, though!

My friend lived up on the 4th floor and always had weird vibes in his room. He awoke one night not being able to breathe or move from his bed like someone was holding him down or sitting on him. After a minute or so he was able to get up and fled the room.

I lived third floor robie side in 03-04 and while i never had any specific thing happen, i would always get weird feelings while walking towards my room with the big corner window to my back. And i knew lots of students that had seen or heard other things on their own.

I lived in 202 Robie for two years......87-88, 88-89. While I don't recall anything paranormal happening, I now think that maybe something could have happened and I simply told myself at the time that there was a logical explanation!
Rodster is correct about the freight elevator! My friends and I rode it to the attic one Halloween to watch horror movies with the RA and other students! I was always creeped out by the story of the woman who hanged herself in the tower. I believe that's where we watched the movies that night!
Ghost Hunters should investigate!

I lived in Robie-Andrews in 2006 and as a young eager freshman my start to college went terribly wrong. My roommate never came home so lying in bed alone at night I vividly remember the scuffling of furniture sounds in the attic. This was always late at night or early am. I didn't know of any haunted rumors until I left at the end of the semester. Whenever in my dorm room I felt an incredible sense of sadness, and unexplainable dread. I hated it there and quickly went from cum laude high honor highschool graduate to a college dropout who was immensely depressed. Homesick was at the pivot of my dread but most of the time the feelings would go away as soon as I got out of there. I avoided my room like the plague and even remember looking out my window with I open and picturing myself falling four stories down. It seemed appealing at the time but I immediately recanted that thought and knew I had to get out. I got out and can say I have never felt so much loneliness, sadness, uncertainty and dread then I did for that short time. Not everyone experienced this, I think as a young woman the entity connected with me in someway to where I could literally feel exactly how she felt. It wasn't good and I feel terribly bad for her. My theory just from my experience is that she committed suicide by jumping.

I LIVE IN ROBIE ANDREWS and I've herd bangin around and I've herd walking around. I'm currently one out to six other people who live in the dorm only because Athelets come early. it's freaky to even take a shower