Brian Bouchard at EarlyMaine.org posted a link last week to a list of 21 executions that occurred in Maine between 1644 and 1885.

My own great-great-grandfather was present at two of these events—the hangings of Peter Williams and Abraham Cox. They had been convicted of murdering the captain, mates, and one other man aboard the brig Albion Cooper.

My great-great-grandfather, Lemuel Dunham, had turned 28 the day before, and came down from Hebron Academy to witness the hangings. "I saw those poor wretches launched into eternity," he would later write, "and it was a sight that I do not wish to witness again” [Oxford County Advertiser, Sept. 5, 1884]. The executioner was William K. Kimball of Paris, who subsequently committed suicide with a pistol.

Coincidentally, a second man from my hometown of Greenwood—Octavus K. Yates—also played a part in the spectacle. He wrote a poem (actually lyrics, to be sung to the same tune as "Old Ironsides"). This he cleverly titled "Last words of Peter Williams and Abraham Cox, who were executed at Auburn, Aug. 27th, 1858, for the murder of the crew of the Brig Albion Cooper." A copy of his broadside now sits in the Library of Congress. 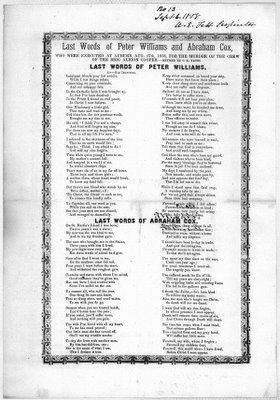 My great,great,great,grandfather,David Halkett, was given the leg and hand cuffs from Cox's limbs as reward for testifying at their trial in Portland. One set of these were passed down to me. A small account of this can be read from Dr. Jefferson Gallisons account written in his series "Old Times in Woodstock published in the Oxford Democrat around 1900 under the heading: "David Halkett, the Old Sailor".