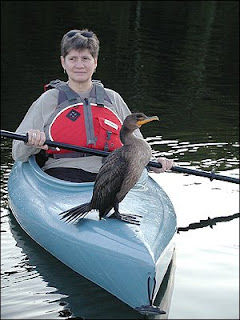 Photo: Georgia Koch paddles out of the cove with her hitchhiking cormorant. (Photo by Ken Bailey/Village Soup)

Ken Bailey over at the Village Soup relates an odd encounter with a surprisingly attentive cormorant near Hope, Maine:

'Hey lady, can I have a ride?'
By Ken Bailey
Outdoors Editor

HOPE (Oct 7):
...
This little adventure began one night a few weeks ago, while Sandy and I were out for an evening boat ride on Megunticook Lake and some friendly fishing competition. I’ll let you know how the competition went later.

We had just pulled into a quiet cove and made a couple of casts when my cell phone rang, breaking the silence of the late-summer setting. Don’t you just love those modern wonders?

Sara Foster was calling from Bishopswood Camps in Hope to inform me that while out kayaking with her friend, Georgia Koch, they had come across an aquatic bird that might possibly be injured. It was perhaps a loon, but because it was tucked way in the back of a cove, partially hidden by tall lake grass, they were unsure.
...
Because we were just a few coves away, it wasn’t long before we pulled into the cove behind Pine Island where the sighting had taken place. As we idled into the cove, we could see Sara in her kayak with Annie — her dog — along for the ride, and Georgia slowly paddling out to greet us from the back of this shallow cove.

As Georgia came closer, we noticed something on the bow of her kayak that looked a little out of place. She continued to slowly come our way, silently paddling her light-blue kayak toward the waiting flotilla.

Soon, I could make out that the object on the bow of her kayak was a bird — a cormorant. The bird was stretching its wings and preening as it approached us; seemingly without a care in the world. Even a greeting bark from Annie did not seem to disturb this fish-eating aquatic bird.
...
After going back into the cove to look for an injured bird, she searched the area where it had been seen. Nothing. The bird was gone.

Scanning the surface of the cove, she still did not see any sign of the bird. Suddenly — off to one side — she heard a splash. A bird briefly appeared a few feet from her kayak, then dove under the water, reappearing on the other side of her craft. She identified it as a cormorant — a very strange cormorant.

After splashing the calm surface of the lake and swimming under the kayak a few times, it approached the surprised woman. As Georgia waited with her kayak paddle in a defensive position, the unfazed bird swam up to the kayak and easily jumped onto the bow.

After the initial shock of this freeloading cormorant hitching a ride, Georgia slowly made her way out of the cove, not knowing what the bird’s next move would be. Would it attack? Would it fly away? Would it panic as she approached the other boats, people and dog.

No, the feathered bowsprit stood its ground, head upright and twisting from side to side to look at all the strangers. Approaching the port side of my boat, Georgia began to explain her evening’s adventure.

There we were, sitting in three boats as the sun began to settle behind the mountains, wondering if this bird was sick or just in need of some human bonding.
...
The bird soon became bored, and dove into the water, swimming a short distance before it took flight, landing on a nearby island. It did not appear to be sick. It was able to dive, swim and fly.

Why did a wild bird — one that usually takes off when a boat or human approaches — lose its fear and spend more than 40 minutes within an arm’s reach of the three of us? Why was it not spooked by the dog?
...

Posted by Michelle Souliere at 9:06 AM