A wolf in fish's clothing? 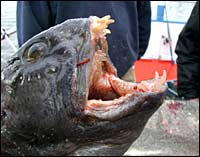 Few people know of the existence of one of Maine's strangest fish natives. Now the singularly unattractive Atlantic Wolf Fish has been identified as a species that is in need of protection. Maine shares this fishy character with other coastal regions such as Iceland, where a blogger recently remarked that the species in general looks as though "its seen a thousand badly-behaved boozy world tours and has the scars and dodgy teeth to prove it." [Source] Incidentally, the post from which the above quote is taken is titled, "A Series of Unfortunate Icelandic Animals, Part One: The Wolf Fish."

MPBN reported on the new status of the fish. You can visit their website to hear the news clip in audiofile form. Photo is from the New Hampshire Fish and Game site.

The Conservation Law Foundation and others today filed a petition seeking federal protection for the species that lives along the sea bed in the deep waters off New England. “This is a really good example of what happens when a species is on its way to extinction, when the population becomes contracted and fragmented.” University of Maine Marine Scientist Les Watling also signed the petition. Speaking at a tele-conference held to launch the petition, he said the excessive use by fishermen of bottom trawling, or rock-hopper gear as it's known, has destroyed much of the wolf-fish's natural habitat. “They like to nest under large boulders, so any habitat disturbance, for example, when rock-hopper gear comes along in these areas and tends to move a boulder or roll a boulder, and then a whole nest is vulnerable.”

The fierce-looking wolf-fish can grow up to 5 feet in length, and have long eel-like tails and sharp teeth that can eat a crab in a few swift bites. Peter Shelley, vice-president of the Conservation Law Foundation, says numbers have dropped dramatically in the last 20 years, and wolf-fish can now only be found in about 2 concentrated areas in New England waters. As a key predator, he says its extinction would be disastrous for the ecosystem. “It controls a lot of other species, which if they're left uncontrolled, can trigger cascading effects in the marine environment that are very destructive to fish populations and the health of the ocean.”
...
The federal government will now study the petition, and if successful, it would be the first time an ocean fish is listed as endangered in New England.

To find out more about the decline of the wolffish in Maine, go to the Gulf of Maine Census of Marine Life.
Posted by Michelle Souliere at 9:15 AM

The hubby and I went on a chartered boat sea fishing some years ago (I caught two pollack!) and one of the guests caught a big wolf fish. They pulled in on board and it tried to go after anyone near by. They had to beat it with an axe handle...it wouldn't die!!

Then when they cleaned the fish, we asked for the head because we wanted the skull (we collect animal skulls...are you surprised?) We took it home, put it in a mesh bag, and hung it in a tree in back of the property for the bugs to do their thing. But two days later, it disappeared...raccoons got it. Darn...

Gah! I think I dated that fish many years ago.

cranky-- Now THAT'S a fish story! I'm sorry the raccoons took it -- that would have made a super cool centerpiece.

Mark-- You and your patchy history!!!

I have to admit I'm one of those Geeks who pays for cable just so I can watch the Discovery channel. This kind of science commands my attention. As a land locked denizen of the turf, to me the ocean depths are just as fascinating as outer space.
Census of Marine Life 2010