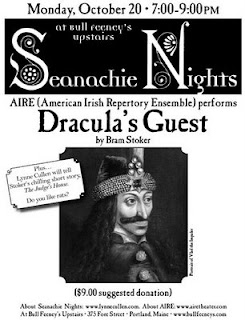 AIRE (American Irish Repertory Ensemble) will be getting into the spirit of Samhain (Celtic Halloween) with a reading of Dracula’s Guest by Bram Stoker -- born Abraham Stoker in a suburb of Dublin in 1847. This spooky short story is set on a dark and stormy Walpurgis Nacht, as the wolves howl and unholy creatures prowl the land.

It is widely believed (though now disputed) that Dracula’s Guest was originally the first chapter of the novel Dracula, which was deleted from the manuscript by the publisher. The piece was published as a short story in 1914, two years after Stoker's death.

Lynne Cullen will begin the evening with a dramatic telling of Bram Stoker’s creepiest short story, The Judge’s House. Do you like rats?

AIRE, Maine’s Irish Theater Company, is dedicated to presenting the best of classic and contemporary Irish and Irish American theater, aiming to share the power and beauty of Irish theater and raise awareness and understanding of Irish culture among New England audiences. AIRE’s next production is The Lonesome West by Martin McDonagh, running October 30-November 16 at The Studio Theater at Portland Stage Company.

Lynne Cullen is a storyteller, artist, playwright and concertina player, who trained as a storyteller in Yorkshire, England, and has performed on both sides of the pond.

The Seanachie Nights series is the idea of local (seanachie) storyteller and playwright Lynne Cullen. Lynne is a member of LANES (League for the Advancement of New England Storytelling), and MOOSE (The Maine Organization of Storytelling Enthusiasts.)
For further information about Seanachie Nights, contact Lynne Cullen at thetwacorbies(@)yahoo.com or at 207-846-1321. www.lynnecullen.com
Posted by Michelle Souliere at 9:07 AM