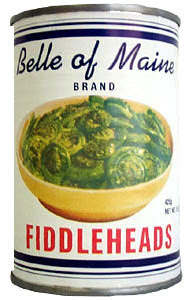 I noticed that there are a bunch of copycat "quick facts about states" type sites that mention that "In Wilton, Maine, there's a cannery that imports and cans only dandelion greens." I decided to look a little further.

It turns out that in fact they can fiddleheads as well as dandelion greens (although I found little mention of canned greens anywhere, I found plenty of mention of the fiddleheads). The man who runs the company is Adrian "Butch" Wells, and the business operates under the name W. S. Wells & Son, which produces all the Belle of Maine canned products [Source]. They've been around since 1894 [Source], when Wells' great-great-grandparents founded the concern.

What I did find out about the dandelion greens I found first on (oddly enough) an Alaskan website:

Wells raised dandelions on a three-acre plot and sold them to restaurants who used them in salads, cooked them as vegetables, and fermented them to make dandelion wine. Even though dandelions flourished in his lawn and among his flowers, they dwindled and died on his dandelion farm. "What I can't understand," Wells laments, "is how these things grow so well where you don't want them to, but when you water and feed and weed them they give up and die."
[Source]

Back in 1990 (05/02/90), when Steven Raichlen's "No Time to Fiddle Around: The Season is Short for the Elusive Ostrich Fern Sprout" article appeared in the Washington (DC) Post on page E16, Wells figured he had handled 24 tons of fiddleheads the prior year. According to one article,

Wells had never eaten a fiddlehead, but his wife Jeanne grew up with them. In 1968, some friends from Vermont asked Wells to can a batch of fiddleheads they had gathered. That got him started and he put up three tons the first year; they sold like proverbial hotcakes. He decided to specialize in vegetables overlooked by the big canneries: dandelion greens, beet greens and fiddleheads.
[Source]

Another article, this time by David Wecker of the Cincinnati Post (6-14-2004), claims the company "grows, imports and cans only dandelion greens," which may be where these other factoid websites are getting their ideas. [Source] 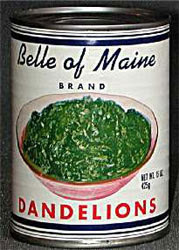 While green bounty such as dandelion greens and fiddleheads may sound foul to those who are not in the habit, it is worth its weight in precious metal to others, giving entrepeneurs like Wells a thriving business year to year. Their canned fiddleheads are "pickled in vinegar and brine with a spice mixture invented by Jeanne Wells. 'It contains garlic, bay leaf and red pepper, and...is habit forming,' Jeanne says." (from Washington Post article quoted above [Source]

The fiddleheads joined the canning catalogue at Wells "back in the '60s" when he had the unbelievably small staff of six pickers. "Now, he's got 50 to 75." [Source]

Other things are changing too. In a Colby College booklet about sustainability, one of the categories is Biodiesel, and Wells is the instigator of their current contribution to this burgeoning cause. To quote the document:

Colby Dining Services was approached by an employee of Colby College, Cindy Wells, who inquired about the possibility of her husband Butch, a local farmer, picking up the used fryolator oil from the kitchen to be recycled and used as biodiesel fuel to power his farm equipment. ... 100% of the used fryolator grease from the campus kitchen is recycled as biodiesel. The grease is picked up weekly at no charge to Dining Services.

So, since the spring of 2006, Colby estimates that approximately 21,000 lbs of grease is being picked up and reused as biodiesel fuel each year. Whooo, that's a lot of grease! And Colby College is happy -- the grease is being re-used, AND it's saving them about $2,000 a year in disposal expenses. [Source]

Like much harvesting, fiddleheads are a seasonal business, and they fill the gap in the spring when pickers have no potatos, strawberries, blueberries, or apples to pull from Maine's fields and orchards.

During fiddlehead season, Wells waits for the harvesters in a lawn chair set in a sunny spot on the loading dock. Pickers come all day long and into the night. Wells says that a lot of the guys are picking just enough for a 12-pack of beer or a pack of cigarettes. ''It is hard work though," he says. ''Every fiddlehead picker that gets out of their car gets out a little bit slowly, and they all walk a little bit funny."
[from "Fiddleheads play a big part in local cuisine and economy" by Jonathan Levitt, Globe Correspondent, May 17, 2006 Source]

So -- in conclusion, I did find more than one online store selling Belle of Maine canned dandelion greens. However, the canned fiddleheads are much more in evidence. I also found rumors of another company, possibly no longer in operation, called Baxter Canning Co (formerly Snowflake Canning), that allegedly canned both fiddlehead and dandelion greens in Maine.

2013 UPDATE: Sadly, it looks as though as of 2012, Belle of Maine has shifted away from canning fiddleheads and is now just selling them fresh in-season. Here is an article from April 2012 about the switch:

It looks like you can order fresh here and there online, and have them shipped frozen when they're in season, but be sure to order early, as most places sell out. They go fast!!

You can also try ordering them canned in a jar, from Canada:
http://store.wildfoods.ca/forbes-wild-foods-fiddleheads/

I've also heard rumors that some Trader Joe's have them in their frozen sections very briefly in season.

We're lucky enough here that they get featured in dishes in local restaurants during that time of the year, but they are fleeting.

My advice would be to hop on the web early in the spring, starting in say late April or early May, and see who's willing to ship the harvest! :) These guys look like they do, in season:
http://www.rumasfiddleheads.com/buynow.html


PLEASE NOTE! I put these links here in the hope of deflecting all the emails I get about where to buy fiddleheads. Please do your own up-to-date research online! I am no more of an expert on the topic than any of you. Enjoy!
Posted by Michelle Souliere at 7:55 PM

You Maine people sure eat some strange things!

Please tell me what stores can I order these from except Maine Goodies. Sound strange but im trying to order these for my elderly mother who loves them! Thank you a bunch!

These are excellent products. I have known Butch and his family all my life (and that's a long time), and they have always done a superb job with these greens.
Of course, I harvest my own dandelions from the yard and get beetgreens from local gardens. But here in Kentucky there is no source for fiddleheads.

The email address for Mr. Well is not open. My mail returns to me. I tried just one of the phone numbers and there was a dead connection (no ring). So my search goes on for canned greens.

I tried one of the numbers and it didn't ring. I email the address of Mr. Wells and my ail was returned. Thenks to trying but I guess my search continues for cacnned grens. :-(

Well apparently there are things that you can't find on the internet. Canned Dandelion greens and canned beet greens.