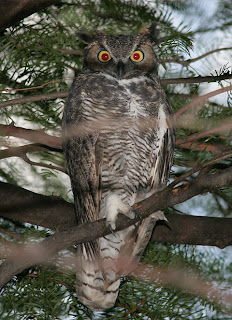 Photo used by permission of T. Beth Kinsey, from her blog, The Firefly Forest.

Thanks to Cranky Yankee for catching this one. :) Bangor is under siege... by a great horned owl!!!

The Crown of Maine webcam site up in Presque Isle, Aroostook County, is asking folks to weigh in today on their online poll, asking "Have you ever been attacked by an Owl?" The best part is that one of the possible answers, beyond the usual "yes" and "no," is the interesting addition of "Don't remember" to the list of choices. HA! You think?

Read on! Great article by John Holyoke from the Bangor Daily News!

BANGOR, Maine — For some cross-country skiing enthusiasts, there’s nothing like heading into the woods on a crisp moonlit night.

Idyllic, perhaps, until a great horned owl swoops down out of a tree, talons outstretched, and smacks you on the head.

For the past several weeks, local cross-country skiers have learned, one by one, that touring the Rolland F. Perry City Forest in Bangor may lead to unforeseen consequences.

Out there on East Trail, near the Veazie Railroad bed, is an owl. An ornery owl. An ornery, territorial, get-out-of-my-neighborhood owl who, in fine Maine fashion, can be a bit brusque when it encounters interlopers.

According to frequent visitors to Bangor’s city forest who have begun keeping count, at least eight skiers (and a few romping dogs) have been targeted by the marauding owl — or owls — over the past three weeks.

Jim Allen of Bangor is a frequent visitor to the forest who had heard about owl attacks while chatting with fellow competitors at last weekend’s Caribou Bog Ski Tour and Race.

On Tuesday, Allen joined the ranks of those who have ended up on the wrong end of an irked owl.
[...]
“I didn’t hear a thing and just caught a glimpse of a shadow after I’d been hit,” Allen said. “I didn’t sit around to see if anything was sitting up in the trees. I screamed, waved my poles and left. With my heart in my throat.”
[...]
“[Great horned owls are] thought to be the most likely,” said Charlie Todd, a wildlife biologist with the state Department of Inland Fisheries and Wildlife. “It’s the boldest nocturnal raptor and the one that has the best reputation for the occasionally bizarre.”
[...]
Many incidents occurred this week — Cassidy said five encounters took place on one evening — and Bangor City Forester Brian Dugas was prepared to post signs warning skiers to avoid the East Trail.
[...]
Allen has been back in the forest twice since his Tuesday encounter, and said he has had other wildlife experiences in Bangor’s city forest.

Last year, he saw a black bear. And several years ago, a hawk struck his head while he was cycling.

The owl incident, however, was one he’ll remember.

“They say … there’s no sound at all when an owl flies. So you don’t hear them coming,” Allen said. “I believe it. Because I never knew anything was coming. I was just skiing merrily along.”

I guess we know what Jim Allen will be answering in the poll! Certainly not "Don't remember"...
Posted by Michelle Souliere at 8:17 PM

Looks quite intimidating in that picture! They are majestic but I don't want them to get too close to me.

I don't think this qualifies as "Strange Maine" - great horned owls are very protective of their nests and young, and this one has predators skiing through its nesting territory! Of course it's going to defend itself! The city should close off those particular ski trails, and let the owl raise its young in peace.

I'm guessing the people who have been attacked certainly felt it was a strange experience!

And I'm sure the owl find humans with long pieces of varnished wood stuck on their feet strange too. Ha!

Too funny! I just found your blog and I'm sure I'll be back...