You are NOT in a video game. 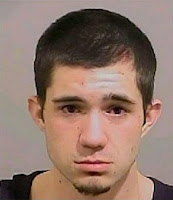 Well, this seemed almost like a straightforward minor crime spree until got to the quote about the reason Goding gave for his actions.

"I Thought I Was in a Video Game"
Vanessa Cutter, Assignment Editor

A Westbrook man was arrested Saturday night after he allegedly stole a car, crashed it and then tried to break into an 80-year-old woman's apartment.

Police say around 9 o'clock, 22-year-old Kyle Goding stole a car from 28 Stevens Avenue then crashed it a few minutes later on the same street. Police say he then fled on foot and tried to break into an elderly woman's apartment at 308 Brown Street.

The woman was able to call police and keep the door locked, preventing Goding from busting in. Officers say a neighbor pushed Goding out of the way when he saw him kicking at the door. When police arrived, they allegedly wrestled Goding to the ground and arrested him just before 11 p.m. Authorities say Goding told them he "thought he was in a video game."
[...]
Read the full article at WGME's website here: [Source]

Posted by Michelle Souliere at 10:30 AM