Knave makes off with pastries! 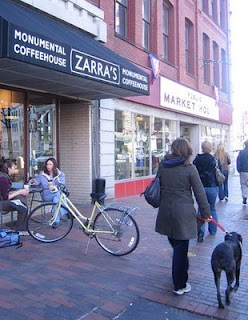 The Portland Press Herald ran this article late last week. Special thanks to Corey Templeton, who spotted it! The great photo of Zarra's is by Brad Searles, and is used in accordance with Creative Commons terms.

...And to think, all these years we thought it was the pesky seagulls.

PORTLAND -- An early-rising Portland thief with a taste for fine pastries was nabbed on a theft charge this morning.

The owners of Zarra’s Monumental Coffee House had asked police to keep an eye on the business because some of its early-morning pastry deliveries had been disappearing, police said.

Police staked out the coffee house at 24 Monument Square and spotted a man who arrived at 5:45 a.m. and took up a position in an alcove nearby.

The store’s pastries were left in front of the unopened store at 6 a.m. and after the delivery person left, the man in the shadows emerged to grab one of the white pastry boxes filled with fresh scones and saunter off toward Congress Street.

Police confronted Darrin Hatt, 43, and arrested him on a charge of theft by unauthorized taking.

Police could not say whether Hatt planned to share his haul with co-workers, or hoard them for himself.

If you get bored someday maybe you can start a 'strang maine crime' blog :-p