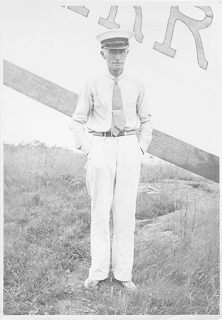 The name Carroll A. Deering will prick up the ears of any ghost ship enthusiast worth their salt, the account ranked by some among the Top Ten Modern Mysteries. However, the name originated in the life of a young boy who grew to be an old man with little interest in launching himself on the seven seas, though his father had been a shipmaker of great repute.

Now Carroll A. Deering himself may be taking a step on the road to the stardom of the mysterious with the recent inexplicable discovery of some of his missing journals, found by students in Bath while working on an unrelated assignment. Seth Koenig of the Times Record lays it on the deck for us:

Morse High students uncover a new Carroll A. Deering mystery
Missing for 41 years, 3 journals of a famous 'ghost ship' namesake are found by students.
by Seth_Koenig@TimesRecord.Com
09/23/2008

BATH — Even decades after his death, mysteries still cling to former Bath resident Carroll A. Deering.

More than 87 years after his namesake schooner became one of the most famous ghost ships in American history, some of Deering's long-lost journals unexpectedly appeared beneath a bush outside Morse High School.

In the months after Deering's March 15, 1967 death, his house was broken into and logbooks from as far back as the early 1900s were stolen. Other mostly sentimentally valuable items also disappeared, including a complete set of books by Edward Rose Snow and a box full of old campaign buttons — as well as Deering's collection of antique muskets and a silver sword from the local Masonic Lodge.

Two weeks ago, Deering journals from 1932, 1962 and 1964 turned up in the proximity of Morse High School. Science teacher Eric Varney sent his students outside to find everyday objects in nature and write descriptions of those objects as part of a lesson on scientific research. What students discovered was a lesson on maritime history and, perhaps, the unexplained.

Freshmen Zach Fone and Wyatt Brackett each found one of the journals near a bush by the school's front entrance, and classmate Chris Fox discovered a third journal across the street near his house.

The students managed to track down Carroll "Pat" Moffatt, the grandson of Deering who resides in Florida but, by coincidence, is currently back in Maine for a brief vacation. Moffatt was fighting in Vietnam in 1967 when his grandfather's home was robbed, and according to Varney, "he never heard anything more about (the stolen journals) until now."

"My first impression when they called me was, 'No, they couldn't have,'" said Moffatt Friday, after he addressed the class to share memories of his grandfather. "I thought, 'Forty-one years later, it couldn't be them.' But when I saw them, I realized it was true — these are his journals.

"Obviously, they couldn't have been under a bush for 40 years," he continued. "That's what's got everybody confused. They couldn't have been outside all that time, they'd have been destroyed. But how did they get there? Nobody knows. Or somebody must know, but they aren't telling. Another mystery of Carroll Deering."

The first mystery of Carroll Deering surrounded the commercial schooner with his name. Deering's father, Gardiner G. Deering, ran one of Bath's prominent shipyards early in the 20th century and named a five-masted cargo ship after Carroll.

Less than two years after its 1919 launch, the schooner Carroll A. Deering was sighted aground on Diamond Shoals, an area off the coast of Cape Hatteras, N.C. There was no sign of the 11-person crew, and then-Secretary of Commerce Herbert Hoover — who would later become U.S. President — launched an aggressive investigation into the disappearances.

"What happened to the Carroll A. Deering? We'd all like to know," pondered Moffatt on Friday. "The crew aboard would like to know. The people were all gone. Nobody ever saw them again."
...
No answers to the mystery of the Carroll A. Deering ghost ship can be found in the man's recently discovered journals, however. Deering himself didn't serve on the boat bearing his name.

"The journals were just a day-to-day record of his life," explained Moffatt. "A list of people that came in and out of his house every day, or the events of the time, like when old sea captains died — stuff like that."

The details scribbled down by Deering in the browned pages may be routine, but their reappearance after 41 years is just as perplexing as what happened to the ship in his name.

Those who are interested in learning a little more about Carroll A. Deering, the man, may be interested to know that his great-grandson, Pat Davis, has a website where a few articles and photos about him have been gathered. It can be found at http://www.thetopsider.net/cad/. The photo of Mr. Carroll shown here is from that website.

Special thanks to Tracy for pointing this great story out!
Posted by Michelle Souliere at 9:30 AM