The THRILL of a lifetime! 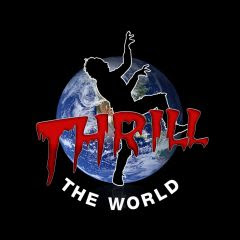 Along with the rash of zombie events worldwide, the Thrill the World group has been trying to coordinate a record-breaking assembly of zombie hordes dancing simultaneously to Michael Jackson's classic monster mash song, Thriller. The event doubles as a fundraiser for each involved community's choice of charity cause. This year, Gray-New Gloucester's middle school students are joining the throng, and you can too!

Thrill the world is almost here
Calling all Zombies! You're invited to dress up like a Zombie and "Thrill the World."
By Zoe Adams
Maine Hometown News, Community

On October 4, 2008 there will be a big "learn the dance" so if you know any one who wants to do the Thriller dance bring them to the Middle School gym from 9 a.m. to noon. They don't have to be in middle school, they can be in high school. Just no one under 10 years old. We need as many people as the drama club can get.

From: www.thrilltheworld.com: Thrill The World is a worldwide attempt to break the Guinness World Record for the Largest Simultaneous Dance with Michael Jackson's "Thriller." Thousands of people in cities around the world will learn the "Thriller", dance and perform it together on the day that Thrill the World takes place.

Posted by Michelle Souliere at 10:32 AM

I'm in that! That event just happened today, it was so fun! I got shot in the head at a wedding reception! XP