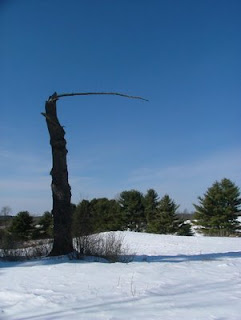 Pineland has long been a staple buzzword for Maine students of the paranormal and weird. Known throughout its history under various names, including the Maine School for the Feeble-Minded, this site has fascinated people because of its often tragic and emotional history. Stories circulated between friends included accounts of strange noises, ghostly cries in the night, and odd lights seen floating in trees.

Today the site houses the progressive Pineland Farms, and much of the grounds are open for public use as walking trails, etc. (I went hiking there a couple of winters ago, and it was stark and beautiful -- a few pictures here). It exists now as a sunny and cheerful place, active and well-populated, a blazing contrast to the bulk of its century-long history as a mental institution and work farm.

The Maine Ghost Hunters paid a visit to the cemetery at Pineland as part of their ongoing research into the site before embarking on a full-blown investigation, and recorded their meditations on the site in a blog posting.

At the beginning of August, 2008 TonyL and I (KatM) took a drive out to New Gloucester to observe the gravesites of the numerous patients who died while in the care and/or under the guardianship of the Pinelands institution. We’re still researching the matter but the history of Pinelands, as a mental health institution, really preceded its very name up until the most recent of times. The accounts of patient maltreatment, abuse, neglect, and abhorrent human condition that plagued the earlier days of this facility have given rise to notions that those who passed-on while confined to Pinelands never really left this place; and some may still haunt the location of their final resting spot.