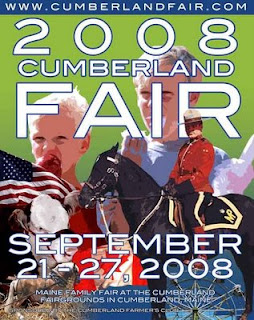 One of the features this year is the Royal Canadian Mounted Police Musical Ride. There will be two shows daily on Sunday 21st, Monday the 22nd and Tuesday the 23rd. Shows are at Noon and 6:00 PM. According to the RCMP website, the Ride is of course not a Midway ride! No, indeed! Instead:

The Musical Ride consists of the execution of a variety of intricate figures and cavalry drill choreographed to music. Demanding utmost control, timing and coordination, these movements are formed by individual horses and riders, in two's, four's and eight's at the trot and at the canter. Months of training, practice and many kilometres/miles around the riding school make horse and rider one.
...
One of the more familiar Musical Ride formations is the "Dome," once featured on the back of the Canadian fifty-dollar bill. The highlight of the Musical Ride is, without a doubt, the CHARGE when lances, with their red and white pennons, are lowered and the riders and their mounts launch into the gallop.

Also on the roster is the annual Pumpkin Weigh-In, where attempts are made to best last year's most massive gourd. Yippee!!!

For a full schedule of events, please go to the Fair's website, http://www.cumberlandfair.com/! You can go directly to a printable PDF file of the schedule here.