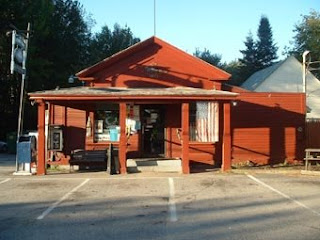 It seems like with the turn of the season, every ghost hunter in town is having a field day -- which is great for those of us who are interested in these things but have yet to do them ourselves!

Molly Lovell of the Kennebunk Post recently accompanied a new Maine paranormal group on a late night investigation of that classic of Kennbunk historic commerce, The Landing Store, at 157 Summer Street. Heading the investigation was the Coffin and Aiello Paranormal Society (CAPS). Hosting them was experienced Landing Store employee, Steven Burr.

While he never conducted his own investigation at the Landing Store, he told of circumstances that couldn’t be explained. While alone in the store one night he heard a man’s voice call his name.
“It was deep and staticky, like it was coming through a ham radio,” he said.
On another occasion, again while alone in the store, soda bottles would appear on the counter after Burr repeatedly put them back in the cooler.
Some employees report baking sheets will fly off the shelf and on one occasion money in the store’s safe seemed to have disappeared only to reappear with no explanation.
Despite this, Burr said he doesn’t feel frightened at the store.
[Source]

The Landing Store has a great website as well, with detailed historical information and imagery from the store's past, which dates back to its original incarnation in 1872 at a different location. You can view the site here: http://www.thelandingstore.com/
Posted by Michelle Souliere at 9:05 AM